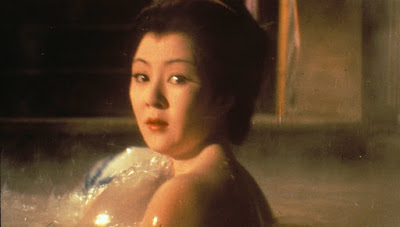 With ZATOICHI AND THE CHEST OF GOLD running as part of the Kazuo Miyagawa: Japan’s Greatest Cinematographer at both The Japan Society and MOMA I'm reposting the review from when we did a month of Zatoichi films

Against a black background the sixth film in the series opens with a kick ass title sequence that has the blind Ichi taking on a series of rogues who attack him. It sets the mood and draws us into the story.

This time out Zatoichi has returned to a town for the first time in two years. He's returned to the village in order to pay respects at the grave of a man he killed on his last visit. Arriving during a celebration to mark the end of a drought he is at first welcomed and then is severely beaten by the people in the town who think he's stolen their tax payment. Deciding to do the right thing he sets off to try and track down the real culprits.

A twisty turny film that plays closer to some of the earlier films in the series with good guys and bad guys not so clearly defined. The film is also much darker and somber than the last few titles with the treachery and mechaniations of the bad guys taking a heavy cost. The film has a kind of noirish feel but with Zatoichi and sword play in the mix.

While the plot keeps things interesting it's the series of wonderful set pieces that really hold our attention. As I said at the top the film begins with a great title sequence, this is followed by a an extended night time battle in the middle of the film, one that has Zatoichi fighting with a man on his back,; the gambling sequences where Ichi wagers whether he can cut a coin in half, and there is the final confrontation that actually has the normally invincible Zatoichi ending up bloodied. Perhaps he's mortal after all.

A very solid entry in the series

ZATOICHI AND THE CHEST OF GOLD is screening as part of Kazuo Miyagawa: Japan’s Greatest Cinematographer which is being co-presented by The Japan Society and The Museum of Modern Art. Click on the links in names of each location for show times, tickets and more information
Posted by Steve Kopian at April 18, 2018