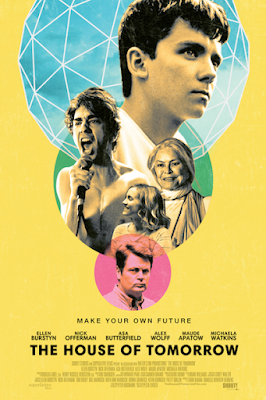 Who knew Buckminster Fuller was a punk? I didn’t. The statement comes at the end of House of Tomorrow when one characters embracing of the punk ethic is brought in line with his grandmothers love of Fuller’s life and work.

House of tomorrow is literally set in and around one of Fuller’s geodesic dome homes. The house acts as home for Sebastian Prendergast and his grandmother who use the house as a museum on Fuller and his ideas. A coming of age tale results as a church group visiting the museum brings Sebastian into contact with people who will help him break out of his shell.

A nice little film House of Tomorrow is an enjoyable time passer. Based on a bestselling young adult novel, the film is going to find its biggest supporters in the same age group that ate up the novel. That’s not a slap against the film, more a statement of fact since despite being populated with some really great characters there is nothing anyone past the target audience hasn’t seen a couple dozen times before. Honestly if you removed the Fuller home this film would fit anywhere.

I liked House of Tomorrow because it’s so well done. I liked it so much  that I wish the story wasn’t so by the numbers. There is enough here that the film should stand out (the performances really are great especially Nick Offerman) but the script makes the film forgettable. A hour after seeing the film when I sat down to write about it I couldn’t remember anything.
Posted by Steve Kopian at April 18, 2018