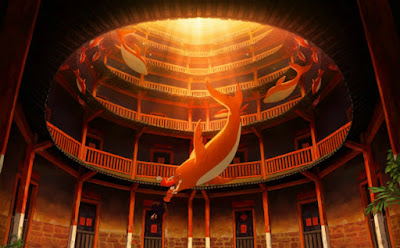 If you are going to see BIG FISH & BEGONIA and can see it on a big screen, do so. There are images that will not be appreciated on anything other than a full size movie screen. The images in this film are such that they overcome any short comings the film may have to make it something worth seeing.

The plot of the film has Chun coming to earth from a realm under the sea to see the world of humans. She comes in the form of a red dolphin and she has 7 days to see the world. Unfortunately as she is heading home she is trapped in a fishing net and runs the risk of being trapped on earth forever. A young man frees her but at the cost of his own life. Feeling the need to repay her debt to him she sells half her life in order revive him as a rapidly growing fish. Complications arise that threaten her world.

Gorgeous to look at but incredibly messy in the telling this film never quite feels like it's it's own thing. Feeling at times like a riff on Ghibli's SPIRITED AWAY not to mention several other films this film plays at times like a greatest hits filtered through a Chinese lens. The result is a film you never stop wanting to compare it to other films. It never fully stands on it's own feet story-wise even as the visuals delight.

What is worse the film kind of demands that you go with it and feel as it wants you to because it says so. Chun falls for the Kun (the fish) because he saved her when he was human. I never explains anything more than than. It never really is said as such until toward the end. Frankly I never bought it, especially since during the early part of the film it seemed Chun is constantly saying she was paying a debt and nothing more. The "feel what we tell you" drive of the film largely kills all emotion in the film, other than anything having to do with Qiu, the boy who loves Chun. Qiu's arc is soul crushing as he literally gives up everything for the girl he loves. It is one of the most heartbreaking things I've seen in a film in the few years. It broke the hearts of a couple of people who were sitting behind me at the NYICFF screening since they remarked it was the saddest thing they had ever seen. This film should have kicked ass and taken names instead of giving us a hearty handshake.

The visuals rescue the film. From giant whales flying in the sky, to huge action set pieces and images of stunning beauty BIG FISH & BEGONIA is a film you'll want to put on and just oogle. The images frequently take your breath away. Married to the frequently soaring score the film on a non-story level delights.

While I don't hate the film, I'm not in love with it. Mostly I think I'm disappointed that a film that can get so much right can blow the central "love" story so badly when it nails the side one so perfectly.

Reservations aside - worth a look especially on the big screen.
Posted by Steve Kopian at April 03, 2018