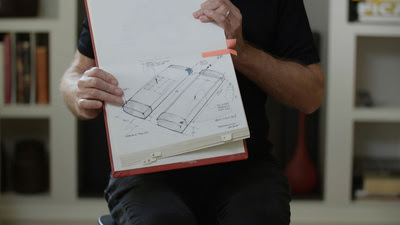 Even if you effectively create the future it won't matter if the present can't handle it. Such was the case with General a company financed by Apple with the idea that people would want what we know as smartphones effectively 15 years before the technology could handle it. The story of the failure that changed the world is the subject of General Magic which is playing at the Tribeca Film Festival.

A nostalgic look back by the people who lived it the film goes from creator Mark Porat legendary red book which layed out exactly what should be done, and predates the modern cellphone by decades on through the set by Apple, the halcyon early days of development when the best and brightest worked on the project through Apple's turning on their bastard child for one of their own, the collapse and the world changing aftermath. Its kind of everything you'd want to know about the project and maybe a little less.

The audience I saw the film with was split by the film. Half the audience loved the great things come out of great failure story. They saw a lovely tale of hope for the future. The rest of us saw a very messy film that kind of works and kind of doesn't.

My problems with the film began from the start as tiny, even on the huge screening room screen, white letters on a lightly colored background told us to turn off our cellphones and then something witty -or at least I thought it might be- but I couldn't read it since the letter bled into the background. Its a problem that repeated itself over and over again through the film as letter to small to notice and too white to read appeared over light colors.

From there the film sped through events at pace mixing historical footage with modern interviews. Its interesting to a point except that the story is told in fits and starts with no real focus. Everyone is telling their version of what happened but details are left out. Additionally odd bits are left in such as the creation of Ebay which is an amusing tale but really doesn't belong here. I have the feeling that this was made by people who knew their subject but really didn't know how to organize it- or even give a sense of the passage of time. Whole sections of the story as the relationships with Apple need more details- certainly more than- Apple set up the company then stole the designs.

The film also suffers from a giant "gee whiz" factor that is damn annoying. Over and over again we are told the the project bombed badly but great things came of it. That would be all well and good but it effectively wipes out any reason to watch the film since we know from frame one how it's going to go. There is no real sense of loss, only the feeling of "we bombed but gosh darn it we picked ourselves up and went on". I would have liked to have had some sense of what it really felt like when it died.

Visually the film made me ill. Outside of the interviews the camera is in constant motion- the camera in the original footage is constantly moving from person to person while in the modern footage there is way too many shots of the ocean of landscapes from above over which the camera turns and pivots and makes one motion sick. After tens of thousands of films over the years this was the first to make me queezy by simply moving.

To be honest there is a great film in this story- but this isn't it.
Email Post
Labels: ambivalent post american documentary