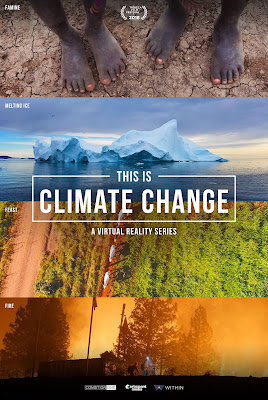 THIS IS CLIMATE CHANGE is a four part VR documentary showing the effects of climate change across the globe. It is an amazing experience. Three of the sections are playing at Tribeca, To of them are now available for download via via the WITHIN app, available on iPhone, Android and all major VR headsets. The other two episodes will be available on the app later in May.

FEAST ( Downloadable now) reveals a section of the Amazon jungle as it goes from pristine beauty to being a cattle farm. We watch the land disappear, the cattle come and go off to be slaughtered. We also see the wet forest becomes a dusty grassland.

FAMINE (Downloadable Now) places us in a refugee camp in Somalia as a drought blights the land and puts everyone's lives in danger. We watch as a small child is taken to a hospital and eventually dies from the diseases running rampant in the camps.

MELTING ICE (Downloadable in May- Not screening at Tribeca ) takes us to Greenland which now looks more like Brownland thanks to the receding glaciers leaving behind water and mud.

FIRE (Downloadable in May) has us tagging along with the men fighting wildfires in California, a state that is in perpetual fire season.

Awe inspiring imagery will leave you speechless. When I finished the four films I staggered into the hall way and stammered at Erica, the young woman who set it all up for me.

"I'm going to be emailing and texting everyone I know when I get out of here about it so yes" I replied before saying something that really didn't explain what I had just seen and felt.

To say that the films will make you think is an understatement. I spent the rest of the day pondering what I had just seen- and trying to get my breath from the work out I got watching it since things really are happening all around you so you have to keep spinning in your chair to catch it all. I don't think I did.

I do know that I was so into it that I tried to move the IV tubes for the sick young girl in Somalia to make it easier for her, until I realized that the things in my hands were the cables for my head set.

Visually the film overwhelms, be it the fly overs in Brazil, the crashing ice in Greenland or the fires in California this images will leave you breathless and speechless. When it was don I wanted to go again simply to experience some of them a second time.

While the .films are near perfect- they do have one flaw which is that there are sequences with text over the images. If you are not oriented in the right position you will miss the information the text imparts. It was something that happened several times as noise to my left  or right had me turning away from where text would appear. It is not fatal, but if you feel like you missed something it is possible you simply were looking in the wrong direction.

I loved this film a great deal. Seeing it was one of the highlights of this year's Tribeca film festival. If you can make the time and go see it. It will not only change the way you see the world, it's frequently just a damn cool experience.

(Sorry if that isn't perfect but it's somewhere past words) 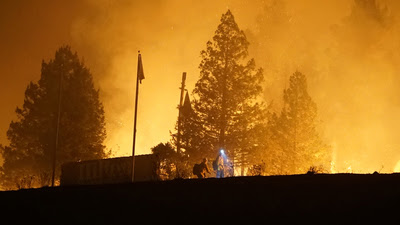