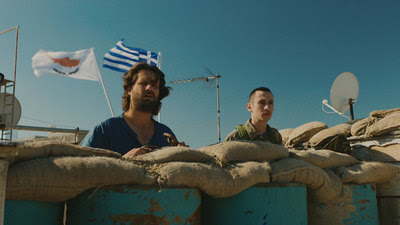 SMUGGLING HENDRIX is a noble mess. Desperately trying to be a comedic drama, it tries t do way more than that with the result it never satisfies.

Yiannis' life has gone off his rails. His girlfriend has left him. His rent is months overdue and some scary guys want the money they loaned him. A bad decision to briefly unleash him results in his dog Jimi running away...and into the occupied portion of Cyprus. While he finds Jimi, getting him back to his side of the island proves to be a major problem.

Beautifully acted film has great characters, great photography and music but  very messy screenplay. Its a very messy plotted film  saddled with a deep need to make a point.

The problem with the plotting is two fold. First, even if allow that Yiannis has never crossed the border into occupied Cyprus, you have to believe that he knows absolutely nothing about crossing the border- which I would accept except he lives right at the border. His actions at other times make us aware he should know about many things he knows nothing about.

The other problem is the film allows the politics to get in the way of everything. Everything that happens makes reference to the politics of the situation. I mean everything-Yiannis constantly calls Hasan's house his house- despite being out of it for over four decades. We have the trio of Yiannis, Hasan and the Smuggler always moving together as if a visual representation of things. It grows tired real fast since everything happens has a "POINT!!!!!!!!!!!"

I tuned out. While I wanted to know if Jimi came back, I really didn't are about the rest.

No that is not true- I wanted to see a version of the story without the shit storm of the politics.

For more information on SMUGGLING HENDRIX at Tribeca go here.
Posted by Steve Kopian at April 21, 2018