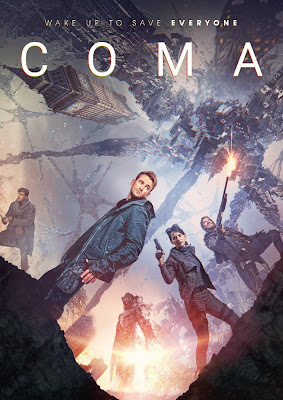 Hitting digital and Blu-Ray Tuesday is the Russian science fiction film COMA and if you love wicked visuals you must see this film.

The film has a young architect waking up in a weird world after an accident. It seems that he is in a coma and his consciousness is waiting is strange world made up of memories both fully remembered and party remembered. He quickly encounters other people who live in the world as well as the dark beings, reapers which feed on the inhabitants. Will he be able to learn to survive and more importantly will he find a way out?

The visuals are the thing here. The bent and twisted world where every which way is up and anything is possible is just wickedly cool. It is so cool that I am disappointed that I couldn't see this on a big screen.

The plot is nothing special. Suffering from being too close to any number of films like THE MATRIX or RE-CYCLE or any of their children COMA is something we've kind of seen before. That's not bad, after all this has wicked special effects and any number of cool sequences, but it keeps it from becoming great. As good as the bits are the whole just never stops reminding us of something we've already seen.

But before you slink off and think that there is no reason to watch this film consider that the visuals and the set pieces are strong enough on their own that they make the film worth seeing. Yea the plot is been their and done that, but at the same time the filmmakers spice it all up with some mind blowing pieces.

Definitely worth a look see for any one who likes science fiction, great visuals and mind blowing action set pieces, COMA hits Blu-ray and digital Tuesday and worth you time and money.