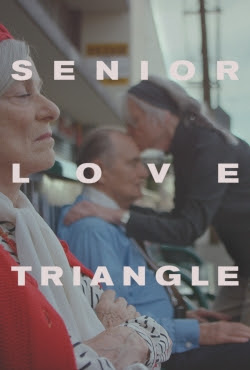 Tom Bower give a great performance as a WW2 vet who begins affairs with two women in  retirement homes. He's struggling to find a place to live and to remain connected to the world (he keeps getting booted out of the places he calls home)

This is a wonderful grand surprise of a film. To be honest I didn't expect to be moved as much as I was. I simply thought this was going to be a by the numbers film and surprisingly it never really went that way. Based on a true story, the real people were the subject of a photo documentary spread that we see during the end credits, this film feels real. Bower and the ladies, Anne Gee Byrd and Marlyn Manson create three of the most alive characters you'll see in any film all year. They are so good that you'll swear you are watching real life. This all feels messy and real. The scenes between the leads have a lived in quality most other films never seem to muster.

To be honest the leads are so good that they seem to be in a completely different film than many of the supporting cast. While the rest of the cast would be fine in any other movie, putting them against Bower, Byrd and Manson they are sadly at sea.

If you want an atypical film that isn't regula Hollywood I highly recommend SENIOR LOVE TRIANGLE, a small gem of a film of the sort that Unseen Films was created to highlight.