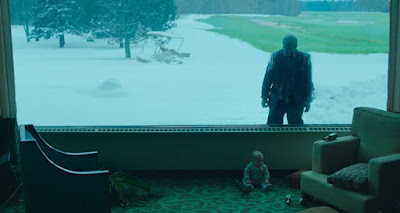 Wicked horror comedy is about an island enclave for the rich of city that is poisoned by a chemical put down to allow them to play golf all year. The chemical turns people into green eyed crazies that eat and kill other people.  As the out break takes everyone on the island only a security guard, a teenaged boy and his infant sibling remain.

Funny horror comedy hits the right notes to blend scares and laughs. While there certainly are more laughs than chills, the film always entertains. Yes, the satire is obvious, but the rest of it isn't, with the result that we are largely surprised by a "zombie" outbreak film, a sub genre that is dying by it's lack of originality.

What I love about the film is that instead of hitting all the expected points and aiming for violence there are real characters and real situation. How the siblings interact is not what we normally see in horror films. Likewise the treatment of the cop and his daughter is something I've not seen outside of the Arnold Schwarzenegger film MAGGIE.

One of the better zombie films of recent vintage, it is highly recommended