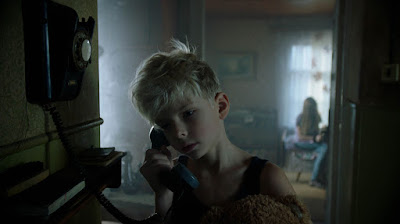 KRATT is a wonderfully off kilter horror comedy. I will not say you are going to like it but it is absolutely worth trying.

The plot of the film has parents dropping their kids off at their grandmother's house for a real old school vacation minus cellphones. The parents are dropping the kids because they got a deal on a romantic get way. The kids are bored until they discover the legend of kratt a being that will do whatever they want. The trouble is they need a soul.

Its not quite that simple, there are additional threads going through this, a cult of nature lovers battling a logger, a put upon minister and the parents on vacation that complicate everything. The result is a film that is occasionally all over the place, but always entertaining. I really had a great deal of fun watching KRATT. To the extent I was emailing friends telling them they had to see and cover it.

To be honest the whole thing is very off kilter. Its so off kilter that I will not  begin to guess if you will like this. There is a darkness mixed qith a silliness to this that may not be for everyone. That isn't a bad thing because it results in a film that is one of a kind. I mean this is as close to a cutesy American family film on acid as you can get without making this purely a film for adults.

This is an off kilter joy and recommended.