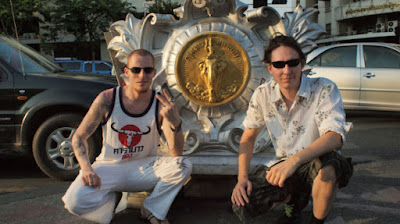 Director Joonas Neuvonen​ along with co director Sadri Cetinkaya tries to come to terms with what happened to his two friends in South East Asia. Using  video of the trip that ended tragically, Neuvonen tries to unpack what happened and how he feels about it.
Decidedly not the feel good film of the year LOST BOYS is a decent into hell for 100 minutes. This is the story of a group of guys who travel to party and then have the party get completely out of control. Its an ugly unpleasant road accident that you can not look away from. My reaction was just to stare at the screen and watch it all go wrong. Even knowing that it all ends really bad, we are told this up front, we are still kind of gutted when everything plays out and all is revealed.
Watching the film I couldn't believe that this film wasn't getting more play in festivals. I wasn't sure why I hadn't run across it until Fantasia. Yes it has graphic sex and drug use, but someone had to be bold enough to run it. However by the time I got to the end I kind of understood why this wasn't playing festivals, its not the sort of film most programmers would run because you aren't singing Zippadee Do Dah at the end, rather you might consider playing in traffic. This is a look at an ugly side of life most people don't want to see.
LOST BOYS rocked me in a way few films have.
While not for most audiences, it is recommended for anyone who wants to take an unflinching look at the dark side...just be warned its a punch in the face.
Posted by Steve Kopian at August 03, 2021