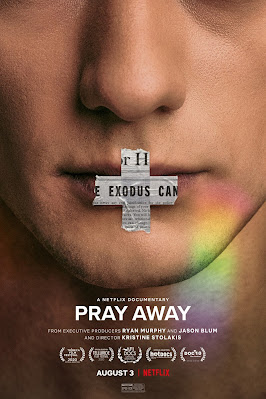 Pray Away is a look at conversion therapy. That’s the discredited con that convinces gays and  lesbians that their orientation is a choice and that if they really want to they can change and live a normal life. It doesn’t  work and does way more harm than good with the percentage of people going through the therapy four or five times more likely to commit suicide than those who don’t.

Sobering and sad film is a must see film for pretty much everyone. This is a film that makes it clear that being gay is not a choice and that trying to change how we are wired can lead to more misery and pain.

What I liked about the film is that it pretty much talks to everyone who was any sort of a name connected with the therapy, including the “successes” who really weren’t.

I was deeply saddened by the film.

Definitely worth a look. The film is now on Netflix.