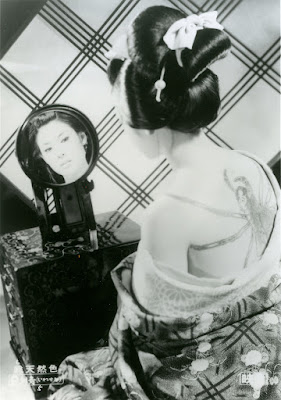 Yes, Otsuya is a geisha, but if you expect her to be passive and meek, you would assume incorrectly. One can tell just by looking at her that Otsuya is serious trouble, yet it is equally clear why men keep falling for her in Yasuzo Masumura’s Tattoo which is playing at the Japan Society’s retrospective Kazuo Miyagawa: Japan’s Greatest Cinematographer. It is a film that subverts and contradicts the prevailing screen stereotypes of Japanese women. Think of it as an anti-geisha film.

Her father’s apprentice does not seem like much, but Otsuya convinces Shinsuke to run away with her anyway. Unfortunately, they seek shelter from the wrong person. While Otsuya is sold into servitude as a geisha, Shinsuke finds himself a murderer on the run, having killed his own would-be assassin.

Not surprisingly, Otsuya demonstrates a remarkable aptitude for the seductive geisha business. She does not have much choice though. Having been branded with a man-eating geisha-spider tattoo by her purchaser, Otsuya carries the permanent mark of her new life. Though she claims her tattoo has an eerie power over her, it is hard to tell just how different the new Otsuya truly is from the old. Perhaps only her social context has changed. It hardly matters for the men in orbit around her though. Slowly but surely, her fugitive lover, the man who betrayed them, her former master, and the artist who tattooed her, all become enmeshed in her web.

Much like the celebrated collaborations between Setsuko Hara and Yasujiro Ozu, Wakao was a frequent muse-like presence in Masumura’s films, including all four of her selections in the Mad, Bad series. Clearly not intimidated by edgy subject matter, Masumura was considered the forerunner of the so-called Japanese “New Wave.” Yet he apprenticed under master filmmakers Kenji Mizoguchi and Kon Ichikawa. Just as Masumura defies easy classification, so does Tattoo, a film distinguished by the richly elegant look and feel of Japanese art cinema, despite its often sensational storyline.

Characters frequently make decisions in Tattoo that are both morally and logically indefensible, but as melodrama, it is all great fun. Sultry and severe, Wakao’s performance as Otsuya ranks with Gene Tierney in Leave Her to Heaven as one of the all-time great screen femme fatales. With an emasculating gaze, she reduces the rest of the cast to sniveling children. She is indeed dangerous to know.

Tattoo is one of those films in which the audience never develops a true rooting interest per se. Instead, most viewers will watch in rapt fascination to see what amoral depths the characters will sink to. Yet, Masumura’s visual sense and Wakao’s riveting performance are so compelling it is ultimately a thoroughly entertaining, highly recommended cinematic experience. Not currently available on DVD in America, the Japan Society’s screening will be a rare opportunity to see it. A perfect choice to be part of Kazuo Miyagawa: Japan’s Greatest Cinematographer Tattoo plays Saturday.
Posted by Steve Kopian at April 19, 2018