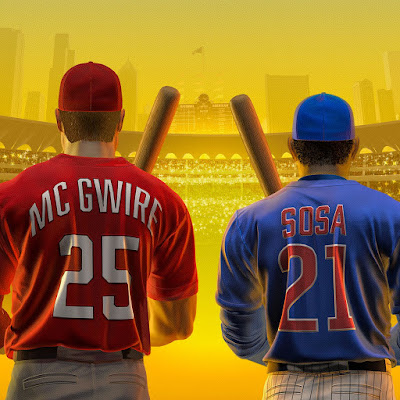 ESPN look at the race between Sammy Sosa and Mark McGwire for the 1998 single season home run title is a breezy jaunt and victory lap for McGwire.

Return with us now to those thrilling days of yesteryear when life was skittles and beer. This is a rah rah look at hat happened made with the wide eyed wonder of a world that wasn't truly aware of PEDs and steroids in baseball. It is largely told from the standpoint that we all had when it was going on. Sure McGwire was taking some over the counter supplements but there wasn't anything truly illegal...

On that breezy nostalgic level LONG GONE SUMMER is actually pretty good. To be certain that it is so lightweight that the two hour run time seems a bit excessive, but it's a compelling look at what happened to the world at large.

And had the film simply taken the stance that it was going to just be a recounting of what happened I would have been largely fine with it. (Though the fact that Sosa ultimately gets the short end of the stick is really freaking wrong- yea McGwire got the record but Sosa was right there until the bitter end- so he deserves better and not to be made into "the villain" in the end because he wasn't as contrite as McGwire But I digress) The trouble with the film comes in the final minutes when the film brings in the PED scandals of the next few years and then tries to be hard hitting while at the same time giving McGwire a glorious send off. It's disingenuous and mucks up the whole story. Either you deal with the fact that the PEDs had actually been there or you don't. Either you give the victory lap or you don't you don't try to do both things because it feels hollow - and the final ten minutes are as hollow as they come.

I'm sure that ESPN had to make this a glorious moment lest they not get approval to use the footage from MLB, nor probably Sosa and McGwire who probably would have walked- and I can accept that- but then they shouldn't have mentioned the PEDs and just let it go.  I went from really liking the film to kind of not, as the film not only struggled to shoehorn the PEDs in but also allowed McGwire to downplay his use saying that the use of illegal substances was actually okay because "everyone was doing it" and because "no one was testing for them". Really? Cheating is cheating what he supposedly was taking beyond the over the counter stuff was banned by MLB.

To be up front about my position, I always assume someone is trying to bend the rules, I know that is part of the game. But if you do do something wrong own it. Don't talk around it. Own it and move on. Frankly anyone suspected of taking PEDs and not caught should have simply said "yes I used them but only when they were legal. Once they were made illegal I stopped". You can't argue with that.

As I said I liked LONG GONE SUMMER until it tried to get serious. Worth a look for any baseball fan, though your reaction may vary.
Posted by Steve Kopian at June 21, 2020