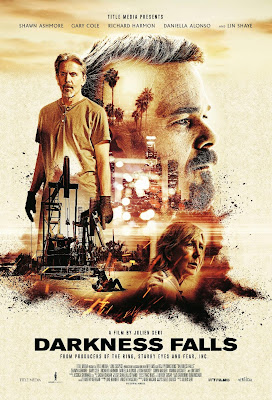 After his wife "commits suicide" a cop suspects foul play. No one believes him but he discovers her death is the work of two misogynistic serial killers who have been suiciding powerful women for a long time.

Odd mix of great, cliche and WTF only occasionally gets its footing to be an okay thriller.

The problems with the film are numerous beginning with the cliched plot of a cop suspecting something is up when no one else does. We've seen this too any times and there is nothing here that doesn't make us wonder why the other cops didn't see the patterns he does. The plot also spins out in ways we've seen before too many times for there to be much suspense. The dialog is often very silly with a couple of turns of phrase that had me wondering if they really said the lines they did. Additionally some of the turns make you wonder if the filmmakers have any connection to reality since they are too fantastc to believe.

The curates egg of this all are the father and son duo who are doing the killing. Gary Cole gives a scary good performance as the father, and watching him walk cock sure through the destruction is chilling. The problem is he is way too cock sure. He knows he is god's gift and after a while it takes the edge off things because he knows he's in classic villain territory... or at least close...and he knows he will never be beat until he suddenly is. He never quite crosses into it because the misogyny is way too much. It becomes laughable in important moments which it should never be. It should boil up and get scarier instead of just being silly. It kills me that the character isn't better written because he could have been one of the greats. You know that the filmmakers had this great idea for a villain and then over did it on the attempt to make him cool.

While there are numerous moments of tension, the opening where the cop's wife dies is chilling,  more often then not DARKNESS FALLS trips over it's own feet.
Posted by Steve Kopian at June 08, 2020