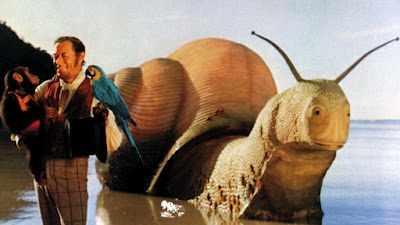 At a certain point, Richard D. Zanuck should’ve realized that the universe didn’t want a Doctor Dolittle movie to be made. Between an initial year’s delay for songs and a screenplay from Alan Jay Lerner that never materialized, the expense of training not one but two sets of animals after the first batch got stuck in quarantine en route to the UK, catastrophic weather delays at their British and Saint Lucia shooting locations, the bombing of their Wiltshire set by a disgruntled local, the racist and antisemitic prima donna antics of star Rex Harrison, perpetual cast and crew illness, feces-covered sound-stages, and the near-fatal heart attack of producer Arthur P. Jacobs, one can assume that Zanuck would’ve gotten the cosmos’ hint that Richard Fleischer’s Doctor Dolittle wasn’t meant to be. (All these details and more can be found in Mark Harris’ superb book Pictures at a Revolution which examines the production of the five 1967 Academy Award for Best Picture nominees which included Dolittle. It turns out that industry block voting and the bribing of Academy members with free screenings, dinner, and drinks can go a long way towards making voters hold their noses and pick a stinker.)

But the earth-shattering success of Robert Wise’s The Sound of Music (1965) had Zanuck—and every other major Hollywood studio head—convinced that overlong, over-produced road show musicals were their ticket to print money. So despite everything, Zanuck persevered and ground out a film that bored audiences, exasperated critics, and made only a fraction of its money back.

There are many reasons why Doctor Dolittle fails as a musical, but the major one is its crushing 152-minute length. The film’s episodic narrative structure results in a story that’s not really a story but a succession of tedious cul-de-sacs each more eye-rolling than the next. There are, surprisingly for a musical, too many songs, most of which sound the same and all of which go on for two or three verses too long. And while the spectacle of seeing so many real animals onscreen never quite loses its charm, Zanuck’s expectation that the spectacle itself should be enough to sustain the whole shebang cratered the whole production. The only redeeming moments come from spasms of unintended campiness like a scene where Harrison sings a love ballad to a seal dressed as an old woman.
Posted by Steve Kopian at June 27, 2020