To start this piece I will state immediately that this was a good movie... however aside from the title namesake & character names being the same, this is not the true story of Artemis Fowl as told in the successful books in the series that is beloved by many fans.

It is conflicting to be both a huge fan of Disney and a huge fan of the Artemis Fowl series because the authenticity of the plot and characters are both lost in an entirely different storyline created from the same source material. As a fan of the series, one of the best aspects is the sheer intellectual brilliance of boy genius Artemis paired with the entirely clandestine manner in which he operates while discovering, exploring, and to be blunt, exploiting the world of the creatures we know from fairy tales such as fairies, sprites, and trolls for his personal gains. Artemis balances being extremely well-mannered with a mind that rivals the best which makes for an entertaining adventure from start to finish. The script takes a secretive world with notable characters and entirely shifts how all of the plot comes to be while also altering the way these characters interact and behave and it does not do the actual story of Artemis Fowl justice. It is a shame that children viewing this with no context of the source material will develop attachments to characters and a story that is not genuine to the series.

As a standalone movie under a different title the movie would have held far less expectations while getting off a decent storyline with well-acted characters. But knowing what the story should have been I can only say I strongly encourage fans of the movie and parents with children to read the novels(!!!) if they truly want to fall in love with the world of Artemis Fowl. 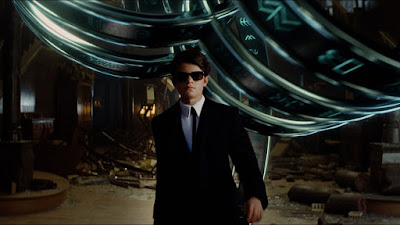