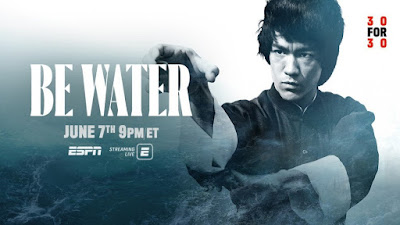 Joe Bendel originally filed this  review of BE WATER when  the film premiered at Sundance in January. With the film in heavy rotation on the ESPN networks because of the lack of sports I'm reposting the piece now.

Bruce Lee is one of handful of movie stars who are just as popular now as they were at the height of their careers. He even spawned a cottage industry of films about his first great Wing Chun master Ip Man, targeted at fans hungry for more, because his family so tightly controls rights to his likeness. With their cooperation, Bao Nguyen chronicles his life through the words of those who knew him best in the ESPN-produced documentary Be Water, which premiered at the 2020 Sundance Film Festival.

Action fans already know the broad strokes of Lee’s story, as well as many of the finer details. Lee was a cocky kid who was sent to America to avoid trouble. Despite the hardships of life as an immigrant, he gained some notoriety as a Kung Fu instructor, but struggled to translate it into a Hollywood acting career. Instead, Lee returned to Hong Kong, where his martial arts films produced by Golden Harvest launched him into international superstardom. Yet, he would tragically die just as he was poised to attain crossover-Hollywood stardom. None of this will be spoilery for anyone interested in this film.

Frankly, Be Water largely revisits the same biographical ground covered in Pete McCormack’s I am Bruce Lee. In fact, both films are structured around the famous “Be water, my friend” interview with Pierre Berton, but Nguyen takes a dramatically different stylistic approach. There are no talking-head shots in Be Water (aside from interview footage of Lee himself). Instead, the disembodied voices of colleagues and family reminisce over photos and video of Lee. It should keep the focus squarely on the legendary subject, yet Nguyen feels compelled to constantly put Lee’s career in the context of the social movements of the 1960s and 1970s, as if he needs to justify our continuing interest. Seriously, he’s Bruce Lee—there’s no call for such defensiveness.

Nevertheless, the film undeniably benefits from the cooperation of the Lee family, who clearly opened their archive to Nguyen, and the Iosanto family (student and co-star Dan and his daughter Diana Lee, the goddaughter of Bruce Lee). Nevertheless, hardcore fans will find Serge Ou’s Iron Fists and Kung Fu Kicks does a better job covering Lee’s tenure with Golden Harvest. On the other hand, Be Water is a better source for Lee’s pre-Hong Kong Hollywood career.

It is always fun to watch Bruce Lee and hear stories about the legend, so you can’t go wrong with Be Water. Still, many fans would rather it focus on Lee’s career and skills, rather than trying to posit him as a representative of his turbulent times. Good but not great
Posted by Steve Kopian at June 19, 2020