Brief thoughts on SOME OTHER PARIS (2020) 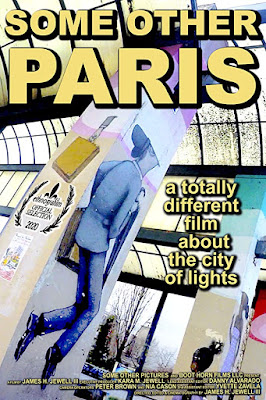 A look at Paris through interviews with mostly from people around the world who have moved to the city because they love it.

Whether you like James Jewell's film or not will be determined by how you react to what is largely just a series of interviews of people talking about Paris and their lives. While there is some street shots and random images of the city, mostly this just is people in their homes or in a cafe talking.

Personally my interest waned rapidly not so much because there wasn't anything wrong, but more because there wasn't anything special. These could be people pretty much everywhere except that they live in Paris. Frankly my thought, and a joke I tweeted, was after seeing this film other than seeing the museums and Eiffel Tower I don't need to go to Paris, I can just go into Brooklyn because it felt like I was in a cafe there. And while I liked a number of the people, the only must see person for me was the sign language tour guide who was just a nice guy and something you don't see or think about (The tour guide stuff is brief but it makes trying this film worth a shot.)

While never bad this is a film I cant rightly rate since your reaction is going to be your own. Truly,  whether you like the film or not will be determined by how you connect or don't to the people on screen and whether you like what they have to say.

SOME OTHER PARIS is now on YouTube.
Posted by Steve Kopian at June 18, 2020