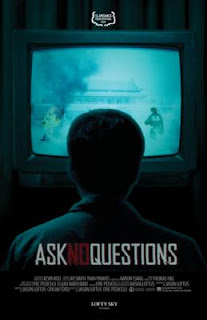 ASK NO QUESTIONS is a look at China’s treatment of the Falun Gong movement which it supported for a while before it’s exponential growth scared the ruling party and the cracked down on it. The film focuses on the incident in Tiananmen Square where several members of Falun Gong set themselves on fire in protest. It was a moment that the Chinese government seized upon as means of showing how dangerous the group was. The investigation is at first tied to the testimony of Chen Ruichang who was a member of the group and he was in one of the brainwash centers that the Chinese send Falun Gong members to. Ruichang was a reporter for Chinese television and what he saw in the coverage mirrored the reports that that he used to produce at the request of authorities.

While absolutely political in nature ASK NO QUESTIONS subverts expectations by not seeming to be political. The film is structured more like a police thriller where directors Jason Loftus and Eric Pedicelli try to sort out what happened on the morning in question. While normally it would be incredibly difficult to sort out what the Chinese government was doing beyond their own reports, Loftus and Pedicelli is aided by the fact that Lisa Weaver, a CNN reporter was on site when everything went down. Her story of what happened was reported by Chinese news agencies-except that they embellished what happened. Over the course of the film the directors try to sort it out.

ASK NO QUESTIONS is a wicked trip down the rabbit hole. It is a decent into the world of doublespeak and state controlled media. Black is white and down is up. It is a wake up call to everyone everywhere at how a government can try and seize control of a narrative for its own ends. The film highlights an incident where China went to great lengths to control the story, much like it is trying to do in Hong Kong right now, where clashes between the government and protesters are a daily occurrence. If China had it’s way the protesters in Hong Kong would only be seen as the monsters.

The greatness of the film is that makes you think about what the official story is,not only in the case of the self-immolations in China, but also on the larger scale as well. It is this making you think about things on a larger level that lifts ASK NO QUESTIONS up from being just a really good docu-mystery into something else entirely.

Without a doubt ASK NO QUESTIONS is a must see. It is a great film on its own terms but by forcing the audience into a wider discussion about what exactly the Chinese government is doing to its own people, it becomes a vital living film, especially in light of the madness currently happening in Hong Kong. It is also a stern warning about what other dictatorships or wannabe dictatorships such as the current American regime are trying to do to their countries.
Posted by Steve Kopian at June 26, 2020