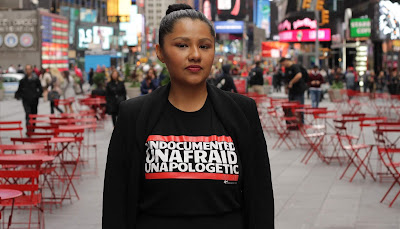 FROM HERE
Portrait of various people who have moved from the lands of their birth to new countries, such as America, Germany, where they struggled to become part of their new homes despite not being documented.

Good film is nicely not full of gloom and doom but instead it is full of hope as we see how the immigrants are making their way and blending the places they call and called home together.

For details on the HRW screening as well as the director Q&A on June 14 go here. 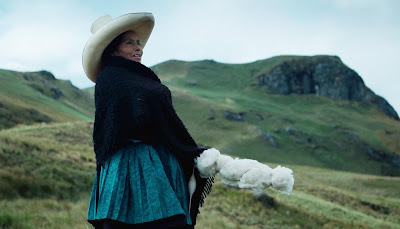 MAXIMA
Portrait of Maxima Acuña who is taking on the gold mining firms in Peru who want to take over her land and the land of her village and the land her village relies on in order to mine gold that will benefit the company alone and throw everyone else into poverty.

Great looking film hits all the right notes  to tell the story of one woman leading the charge to stop big business  from taking over everything she loves and holds dear. This is a solid and well made film that highlights how one person can take on big business and hold them at bay.

If I am not jumping up and down about how good the film is it is only because as good as the film is it steers very close to other films on similar subjects. That is not an indication of any crack in the high quality of the film, rather it is an indication that this is hitting me,a  person who writes up 1000 films a year and sees even more, differently than one who sees less. Regardless I know this is a very good film just not one I'm going to do back flips for.

For information on the HRW screenings including a live Q&A go here.
Posted by Steve Kopian at June 11, 2020