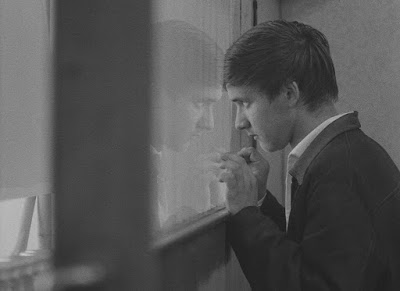 Ever dreamed of running in place? Ever dreamed where, no matter how far or fast you ran, the thing you were chasing never got any closer? Miloš Forman’s Black Peter is a cinematic distillation of that sensation, strained through a sieve of awkward teenage self-discovery in the shadow of mid-century Czechoslovakian Communism.

Filmed with a cast of mostly nonprofessional actors, the film follows Petr (Ladislav Jakim), a teenager mired in recursive adolescent inertia. No matter how he struggles to get ahead in life, to get the girl, to get some money, to get some self-respect, he always ends up exactly where he starts. Consider his job as a floor detective at a grocery store. His imperious boss gives him blatantly contradictory instructions for how to monitor for shoplifters, browbeating him for standing around seemingly doing nothing then browbeating him again for moving around and openly watching customers. His first day climaxes in a hilarious segment where he catches a shoplifter in the act but literally can’t do anything about it other than follow the thief out of the store, through the streets, and into another shop before losing sight of him and returning home empty-handed. Once at home, he’s browbeaten a third time by his father (Jan Vostrčil) who gives long, rambling tirades about manliness and responsibility that change directions mid-sentence, leaving the confused Petr frozen at the dinner table with a spoon of soup halfway to his mouth.

The obvious interpretation of these scenes is that they’re a not-so-subtle commentary on government surveillance and the Kafkaesque realities of living under Communism’s byzantine, self-perpetuating bureaucracy. (Indeed, in addition to being Forman’s first feature film, it was his first of many that got him into trouble with government censors. It was only after it won the Locarno International Film Festival’s prestigious Golden Leopard award that they relented and allowed it distribution.) But it can also be read more superficially as a simple statement on the confusion that comes with growing up, particularly the lengthy (and dull) middle section dominated by an extended dance party sequence where Petr and his friends try and woo girls but end up alone, drunk, and passed out. It would seem some aspects of being a teenager are universal.

Though rough and amateurish, Black Peter is a fascinating starting point for the defining figure of the Czechoslovak New Wave.
Posted by Steve Kopian at June 20, 2020