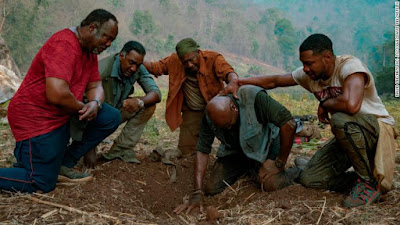 Spike Lee’s movies refuse to exist in a vacuum. They’re always reflections and responses to the world around them, to the course of popular (read: white) cinema, to the arc of God’s justice in the face of man’s injustice. His new film Da 5 Bloods may be his most ambitious yet, a bold attempt to reconcile the contributions of black soldiers in the Vietnam War, the lingering effects of Western colonialism in the Third World, the valorization of American soldiers in Hollywood cinema, and the looming shadow of the Trump administration overhanging the #BlackLivesMatter movement. Yet ultimately, that expansiveness is one of the reasons why the film struggles to reach its full potential.

For one, it lacks the laser focus that makes his longer movies fly by—though only nineteen minutes longer than his last film BlacKkKlansman (2018), Da 5 Bloods feels at least an hour longer. Much of this is due to the first act which feels oddly perfunctory for a filmmaker like Lee who takes such giddy pleasure in playing with and subverting traditional storytelling expectations. Much of its feels like he shot it on autopilot. We meet four African American Vietnam veterans who return to Vietnam in the modern day to recover the remains of their beloved squad leader “Stormin’ Norm” Holloway (Chadwick Boseman)…and the massive shipment of gold bricks pilfered from the US Army payroll they buried near him. Along they way they’re joined by David (Jonathan Majors), the son of their unofficial leader Paul (Delroy Lindo), a deeply traumatized and emotionally unstable man who, to risk minor spoilers, becomes the Humphrey Bogart to the expedition’s Treasure of the Sierra Madre.

Things only snap to life after the first hour once they recover Norm’s remains and the treasure—we can practically feel Lee’s interest waking up as Da 5 Bloods transforms from recycled war film to deeply troubling exploration of guilt (both national and personal), grief, mental illness, male camaraderie, fatherhood, and, surprisingly, patriotism. Lee never quite gets his disparate thematic considerations to emulsify, but when the movie works it’s positively galvanic, particularly the scenes involving Lindo who might have the most captivating screen presence of any character in any Lee film since Denzel Washington’s Malcolm X. The scenes near the end where he addresses the camera like a maddened Shakespearean villain giving asides to the audience is the stuff of nightmares and Oscar clips.
Posted by Steve Kopian at June 13, 2020