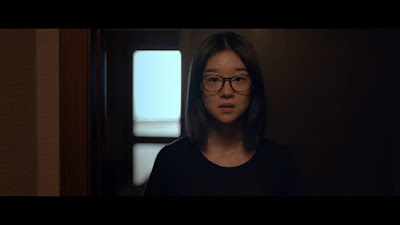 There’s something distinctly Lovecraftian about Kim Jin-won’s Warning: Do Not Play. No, there are no Old Gods, no extra-dimensional aliens, nor any faux-Darwinian racism. The Lovecraftian flavoring comes from its protagonist’s incessant, unstoppable, unappeasable curiosity. Like so many of Lovecraft’s protagonists who followed clues and bread crumbs against all common sense to uncover forbidden rites, blasphemous temples, and inconceivable monstrosities, Jin-won’s hero finds herself helpless at the hands of her own need to know what shouldn’t be known.

The film follows Mi-Jung (Seo Ye-ji), a rookie film director who made waves at film festivals with a short film but now finds herself stuck with a case of artist’s block for her follow-up. After hearing a rumor about a mysterious student film from a nearby university which was hushed up after it supposedly drove people screaming from the theater, she goes in search of it. Her research eventually leads her to discover that, yes, the film is real and, what’s more, its director Jae-Hyun (Jim Seon-kyu) was clearly driven insane by the experience. But instead of taking Jae-Hyun’s desperate warning to forget the film when they meet seriously, she soldiers on to discover a secret lair in a nondescript suburb that would make Kevin Spacey’s John Doe from Se7en (1995) feel right at home. Every red flag imaginable shows up to warn Mi-Jung away: eerie red lights, a decrepit interior, wooden crosses strewn over everything. The kicker: a room sealed with a giant padlock straight out of a Looney Tune. But against all common sense (and self-preservation instincts), she breaks the lock, retrieves the only surviving copy of the haunted film, and gets herself targeted by an old-fashioned murder ghost.

What can you say? Curiosity’s a killer.

The rest of Warning: Do Not Play plays like a traditional ghost story made slightly more interesting by a layer of self-reflection on horror filmmaking and its capacity to exorcise and heal past trauma. Both Mi-Jun and Jae-Hyun turned to horror filmmaking for the catharsis it allowed them to achieve from their traumatic childhoods, and indeed Mi-Jun finds herself using her phone’s camera as a weapon to simultaneously shield herself from the supernatural and capture it so its existence can be proven. With more than its fair share of effective scares, the film’s a satisfyingly ambitious chiller.
Posted by Steve Kopian at June 14, 2020