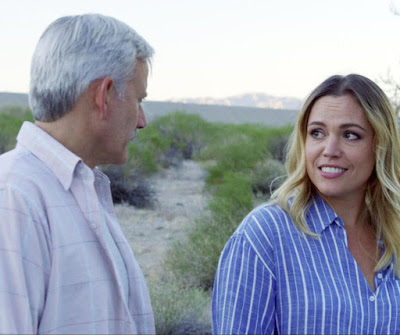 If THE 11TH GREEN wasn't hitting virtual theaters today I would I would have sat on this review for a while. I know I would have watched it a second time because it is completely not what I expected and I really don't know how to react.

The plot of the film had Campbell Scott's father being found dead in his home in Arizona. Scott was estranged from his dad so he was not really aware of how his dad was doing. Flying from DC, where he is a contributor to a TV news network, he begins to make funeral arrangements, grieve... and fall into the middle of the story of how in the 1950's aliens contacted the US government.

And before you think this is going to be an exciting film about a grand coverup with maybe a chase or two and all of that stop. This is a matter of fact drama that plays out occasionally like a thriller but is really not what you expect. This about people and a big secret. This is largely set in and around Scott's father's home. people do cross through time and Eisenhower and Obama are both major players, but mostly this is people talking. The secrets exposed are told by people who were there. It's all very low key and real with the result my initial reaction after seeing the film last night was "that wasn't what I expected" - I mean UFO stories don't play out so matter of factly. It's so not what I expected that I wanted to watch it again because it so caught me off guard I don't know how to react.

Don't get me wrong, it's a surprisingly good film, it's just one that so blurs the genre lines that I can't do the film justice in the short turn around time I was given to review it. (I received and watched the film in considerably less than 24 hours before this review posted.)

And for better or worse that instantly makes the film something you'll want to see if you want to see a film that doesn't play by the rules. It is a film that you have to adjust your perceptions for so you can fully engage. I wasn't fully engaged when I saw it because I kept thinking it was going to go one way and it went another. I now am looking forward to a second pass (that's a quiet rave folks)

Refusing to do what expected aside, THE 11TH GREEN, is a good low key drama about something that may or may not have happened. It is definitely worth a look for anyone interested in the subject or a film that isn't going to play out according to any roadmap.