Grindhouse Purgatory or what is Steve reading part 3? 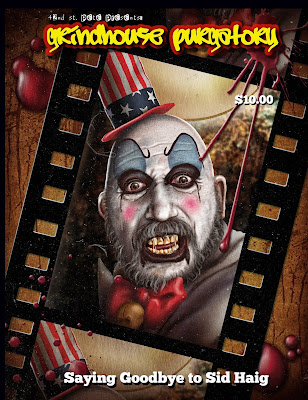 My library is literally all over the place. Most of it is in storage at the moment as I shift things around. Pretty much the only things left are the essential (to me) film reference books. However there is only so many times I can reread things.

I needing some sort of real cinematic information in book form I picked up the 3 most recent issues of  Grindhouse Purgatory from 42nd Street Pete... and was so happy I went back and bought the entire run.

Started because Pete wanted to do something on the order of Screw magazine but with interest in all of the things that went on in and around the grindhouses of 42nd street and elsewhere the magazine is a mix of personal remembrances, reviews, interviews and pieces on a wide range of subjects. Simply reading the pieces in order without looking at the contents has been trippy because things bounce around.  While some details of some films isn't always spot on, some "reviews" take the form of a discussion of seeing a film decades before for the first time, you really don't care because the storytelling is so good.

Or mostly good. I'm not going to lie, some pieces are just okay. Its not that they aren't heartfelt, but they aren't well written. On the other hand go two or three pages and something will blow you out of the water.

If you want to try the magazine- and if you love exploitation/ grindhouse or just films in general I highly suggest you do, start with the Greatest Hits compendium and the current issue 15 a tribute to Sid Haig.

The Greatest Hits is a collection made up from the first three issues, with some deletions.  It gives you a wonderful sense of what the magazine is with frank reports of going into grind houses and porno palaces on The Deuce, 42nd St in NYC in the bad old days, reviews of films that played the houses, plus bits on wrestling in the 80's, discovering films because you had to see one film with an actor on a double bill (in the days before VHS) and all sorts of stuff. Its an amazing reference/time capsule of days gone by. As someone who was there for some of the glory days of grindhouse this is the real deal. There are great articles on cannibal films, the Blood Island films, what it was like to run a drive in, how Pete ran a video store in the early days of home video, and looks at a bunch of films you probably never heard of.

On the other hand I do have to warn you that the Greatest Hits has a couple of articles in it that are not cinematic but sociological. Pete gives us the low down on visiting the massage parlors, whorehouses and adult book stores.  There is nothing really wrong with the pieces, hell from the standpoint of letting you know what it was like in NYC during the bad old days they can't be beat, on the other hand I got about halfway through each and found I connected with the nostalgia but didn't care beyond that.(Part of it in reading a number of the early issues the stories seem to repeat)

At the same time the looks inside the adult film industry (there are a couple pieces in issue 4) intrigued me more since they spoke to something more than just one guy's experiences with sex.

And I should point out that most of the reviews are really informative. Forget nice and neat reference books, this magazine is full of pieces that tell it like it is. They don't mince words in calling a film crap or heaping praise. This is a friend talking to you not a NY Times reviewer trying to seem snooty.(They often talk about the 42nd St SRO audience reactions to classic grindhouse films like Cannibal Holocaust).  What I like is that Pete gives people the room to talk about the films they love or hate, with the results that, say in issue 5's look at STAR CRASH, we get a long look at film most people dismiss,

The Greatest Hits is worth a look for a taste of the magazine, with the understanding it is a bit rawer than later issues. With later issues the magazine found a footing and  as less scattershot.

If you loved Sid Haig you must get the tribute issue #15. While the issue is full of great short pieces on him it's in the long pieces that this becomes a must have.

First there is a long excerpt from a four hour interview with Haig. He holds nothing back and talks about his whole career. It is one of the best interviews I've ever read since it reads like two friends talking- which is what it is. His whole career is represented and it is so good I want to see what the whole talk was like.

Then there are several long reviews on Haig's films like those with Pam Grier or what many consider his best role in PIT STOP. Told with love and stories from Sid the reviews make you want to go out and see the films you've missed.

I love this magazine a great deal and it's worth a shot (assuming you realize it can be hit and miss like the grindhouse) and can be had at Amazon and elsewhere.
Posted by Steve Kopian at June 30, 2020