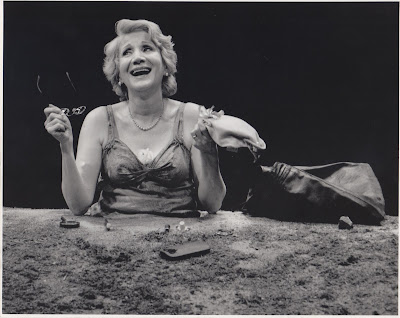 The excellent film OLYMPIA hits virtual theaters on July 9th with a special Q&A and release in Greece. It then gets a regular virtual release on July 10. However before that the film is playing a special Drive-In engagement at the Bel Aire Diner in Astoria Queens on Saturday for Olymia's birthday.

What follows is the review I ran when the film World premiered followed by the press release for the special screening. It has details on how to buy tickts.

Olympia is a wonderful portrait of the great Olympia Dukakis as she lives and breaths. This is not your typical birth to now recounting of her life but almost two hours with the great lady as she travels, performs and goes through paces. All along the way director Harry Mavromichalis peppers her with questions about her life and thoughts. We get it all, Olympia holds nothing back (really) with the result that we are pulled really close to her.

This is a truly wonderful portrait of the Grand Dame of the theater and big screen. Rarely has any person, of any sort, but this much of themselves out there for everyone to see. I honestly don’t think there is anything you’ll not know about her by the end. It is as good a cinematic biography as you are ever likely to see. (It’s so good that the only thing I can think of bad to say about the film is that some people are going to find it a little long at 105 minutes- but they don’t count)

---
New York, NY – June 16, 2020 – Abramorama announced today that the feature length documentary, Olympia, celebrating the life and career of Academy Award-winning actress Olympia Dukakis, will screen at the Bel Aire Diner’s Drive-In Movie Night on her 89th birthday, Saturday, June 20. In commemoration, the screening will include birthday messages from some of Olympia Dukakis’s closest celebrity friends and fellow actors.

The 55-year old diner in Astoria, Queens launched their drive-in movie series in mid-May as a way to bring socially distanced entertainment back to the community during the COVID-19 pandemic. The screenings of classic films have been wildly popular, selling out in minutes. Olympia will mark the first time that the diner will screen a film ahead of its release date.

Directed by Harry Mavromichalis, Olympia will have a national LIVE streaming premiere in North America on July 9th at 8pm ET, followed by a Q&A, with a special premiere screening in Greece and Europe at 1pm ET on July 10th and an exclusive ‘virtual cinema’ release beginning Friday, July 10th

Abramorama CEO Richard Abramowitz and COO Karol Martesko-Fenster said, “Olympia Dukakis is sui generis. We’ve been lucky to see her work and now we’re privileged to peek behind the curtain to see how and why she does it.”

Director Harry Mavromichalis added, “Nothing seems more perfect than celebrating the life and work of Olympia Dukakis at the center of the Greek American community in Astoria, Queens.”

Bel Aire Diner owner Kal Dellaportas stated, “Olympia Dukakis’ story is one that reflects the story of all powerful and resilient women in our community, including my own mother. We are a product of these great women and are honored to celebrate Olympia on her 89th birthday."

The award-winning documentary film Olympia, directed by Harry Mavromichalis and Executive Produced by Sid Ganis and Anthoula Katsimatides is a sublimely intimate fly on the wall verité documentary that tells a poignant story of a woman becoming her own woman, on her own terms to assert a gigantic creative force into the world. Rebelling against her old world panty-sniffing suspicious Greek mother to assert her strong sexual drive, fighting the feeling she was “too ethnic” amid the Boston Brahmin at BU, and starting her own theatre company in New Jersey instead of waiting for the phone to ring, Olympia Dukakis models how to live life with blazing courage. Throughout an engrossing story that seamlessly blends past and present, she opens her heart and exposes her truest self to the audience. The raw honesty with which Olympia leads us into the core of herself is what makes this film luminary. As fellow actors with whom she has shared the limelight Laura Linney, Diane Ladd, Whoopi Goldberg and Austin Pendleton all testify, Olympia is “totally open and crazy”, which is what turns out to be the marker of her absolute sanity. The film features Whoopi Goldberg, Laura Linney, Diane Ladd, Lynn Cohen, Lainie Kazan, Austin Pendleton, Ed Asner, Armistead Maupin and Michael Dukakis. The film made its World Premiere at DOC NYC and its European Premiere at the Thessaloniki Documentary Festival.

Tickets for the June 20th Bel Aire Diner screenings can be purchased at www.belairediner.nyc/store/event/. A portion of the proceeds will go to Eclipses Group Theater New York, a 501c (3) Nonprofit Theater Company, whose objective is to collaborate with artists around the world developing an intercultural artistic dialogue of global interest.