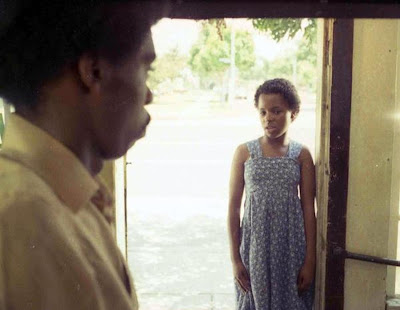 It feels appropriate that the family at the center of Charles Burnett’s neglected My Brother’s Wedding own a dry cleaners, for the film feels like a memory of visiting one with your parents on a hot summer day back when you were a child. Everything has the languid deadness of being dragged along on a grown-up errand—the light from outside hurts the eyes and washes everything out, the adults all seem tired and move in slow-motion, and everything has the inescapable mood of waiting. Burnett’s sense of place is so strong, so vividly realized that you can feel the tug and pull of the recycled A/C and the muggy outside air whenever someone enters and leaves the store.

This is a film largely disinterested with plot, though it eventually comes around to having one. It has characters, but neither are they the focal point. Instead, My Brother’s Wedding is concerned with replicating the rhythms and textures of 80s South Central Los Angeles. Jonathan Rosenbaum once wrote that if a better film had been made about “black ghetto life” he’d yet to see it. My knowledge of black filmmaking isn’t encyclopedic enough to agree or disagree, but certainly no other cinematic black environment—saving perhaps Burnett’s own depiction of LA’s Watts district in his debut film Killer of Sheep (1978)—felt as real, lived in, and authentic until Spike Lee took audiences on a tour of Bedford-Stuyvesant in Do the Right Thing (1989).

The film has a raw, almost primitive feel to it, obviously necessitated by the film’s microscopic budget and nonprofessional cast. But the feelings it inspires, its snarling observations on black poverty and black class consciousness are razor-sharp. The “hero” is Pierce Mundy (Everett Silas), a listless thirty-year-old who works at his parents’ dry cleaners whenever he isn’t fooling around with his childhood friend Soldier (Ronnie Bell), a good-for-nothing deadbeat fresh out of prison. Though he has no ambitions of his own, he’s resentful of his lawyer brother Wendell’s (Monte Easter) plan to marry a rich woman whose family puts on haughty aristocratic airs (they even have a Latina maid). Pierce’s devotions are trapped between Soldier’s lower-class idleness, his parents’ middle-class productivity, and Wendell’s upper-class aspirations. Pierce’s eventual declaration of loyalty is the stuff of high tragedy, reaffirming Burnett as one of black cinema’s greatest poets.
Posted by Steve Kopian at June 11, 2020