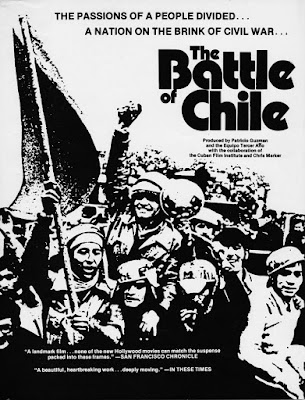 Patricio Guzman's THE BATTLE OF CHILE is something everyone needs to be watching right now. This story of the the overthrow of Salvador Allende government by the military lead by Pinochet is a chilling warning of what can happen when a country splits socially. While I would like to think that the military won't take over in America, the fact that Donald Trump has sewn divides in the country  could be reflected in the divides that were in Chile and lead to the death of democracy.

The film traces what happened after the lawfully elected Salvador Allende, faced a congressional election after attempting to reorganize the country as a socialized democracy. In the wake of the elections the right incited violence and it ended with Pinochet seizing control to end "the Marxist cancer". It was a coup backed by American interests and aimed at keeping the rich and powerful exactly that.

I am, of course, grossly simplifying. The real story of it allis explained so much better in the film. The  truth is that I am phrasing it that way because the divides of Chile have parallels in the US where the mega-rich like the Koch Brothers seek to manipulate the masses and the politicos so they back their efforts to get even richer than they already are. If you are aware of what is going on in America when you see THE BATTLE OF CHILE then you will become frightened as history appears to be replaying itself once more. From media manipulation to cops in the street its all there.

You will forgive me if  I don't lay everything out about this film. There is way more to discuss and I have a longer version of this review sitting in my draft file. Time is short and you need to be clued in to this film and the fact that it may serve as a warning of what might happen.

If you do watch the film, do be patient at the start. I say this because a half hour or so of the film is made up of man on the street interviews about the then upcoming election. While it sets the mood it also goes on way too long (even Pauline Kael wasn't thrilled with it). I know it puts us in a time and place but too much is repeated just by different voices. However once you get past that the remaining four hours are riveting. I tore through them at speed. (And then I watched the related CHILE, OBSTINATE MEMORY about Guzman's return to Chile to chow the films)

My words are nothing because the film is like watching lightning in a bottle.

See this film- see it so you know about the evil of men and understand the evil of our fathers lives with in their sons.
Posted by Steve Kopian at June 15, 2020