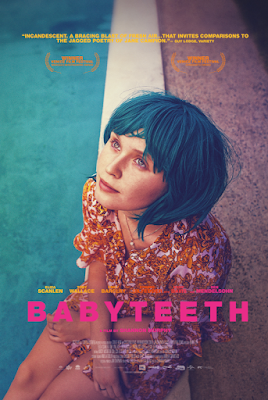 BABYTEETH  was going to be one of the big films at New Directors New Films this year and I avoided it like the plague. Actually I didn't have to because the Covid 19 pandemic struck and it got pulled off my radar. Then all the influx of new releases and virtual festivals died down and I was left to try and program slots for Unseen so I bit the bullet and said what the hell and got a screener.

I really liked BABYTEETH. To be certain it maybe a bit too long an too quirky for it's own good, but it is ultimately real and funny and good time with flawed but good people.

The film centers around Milla. She is sixteen and has cancer that refuses to go away. Her parents are doing the best they can. One day Milla meets Moses. He is 24, homeless and a drug dealer and she instantly falls in love. Where it goes is the film.

There is much to love about this film, from it's very real characters, Milla's parents are more than figues but real people trying to live their own lives; to the script which had Rita Kalnejais open up her play so well you can't see how this would have worked on stage; to the performances where everyone deserves an award and Ben Mendleson as Milla's father does more than some recent by rote performances. This is a charming little film that you want to take home to love with you.

At the same time I suspect some of the quirky turns may not sit well with some people who will find it the wrong sort of cute.  I would ignore them. Personally I'm not sure if the film isn't a tad too long. I ran out of steam late in the game not because anything was bad just because it just felt long to me.

Quibbles aside, I really liked BABYTEETH way more than I thought I would and as such it is very recommended when it hts VOD Friday.
Posted by Steve Kopian at June 15, 2020