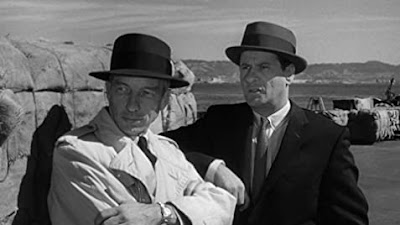 In 1971, director Don Siegel changed the face of the police procedural forever with his film Dirty Harry about a violent, rule-breaking San Francisco police inspector who kills and tortures above and beyond the purview of the law. Correctly identified by Roger Ebert as fascistic, it’s since served as the template for any number of copycat cop characters who shoot first and ask questions later. (The legacy it’s had on the self-image of real-life cops is one we’re tragically still dealing with today.) But those who turn to Siegel’s earlier film The Lineup—another police procedural about San Francisco cops chasing mentally unstable killers—hoping for a precursor to Dirty Harry will be sorely disappointed.

With a script penned by Stirling Silliphant who’d go on to perfect the police potboiler with the shows Route 66 and Naked City before winning an Oscar for Norman Jewison’s In the Heat of the Night (1967), the film has more in common with its fellow 50s noir which frequently eschewed the dreamlike atmosphere and carefully constructed studio sets of late 30s and 40s noir in favor of gritty, realistic stories shot on location in major cities and suburbs. Curiously, though, the film could also be seen as a crime procedural, as it gives equal narrative weight to its villains and their criminal methods as it does its police heroes. The villains here are Dancer (Eli Wallach) and Julian (Robert Keith), two unbalanced collectors-cum-hitmen for an international drug-smuggling ring who “visit” a number of recently returned tourists who unknowingly had heroin stashed in their souvenirs. As they leave a trail of bodies all over the city, they’re chased down by Lieutenant Ben Guthrie (Warner Anderson), a no-nonsense (and no-personality) cop who embodies the kind of impersonal yet dogged professionalism the police were desperate to project to the 50s American public.

The story itself is competently told yet hardly remarkable for its era, and with the exception of Wallach and Keith’s performances none of the acting is particularly memorable. Instead the film’s main selling point is its intense visual beauty; veteran cinematographer Hal Mohr made the best of his locations, more than once pausing the story so the film can drink in its characters being dwarfed by their surroundings like the cavernous hallways of the San Francisco Opera House or the spacious inner shell of the Sutro Baths
Posted by Steve Kopian at June 28, 2020