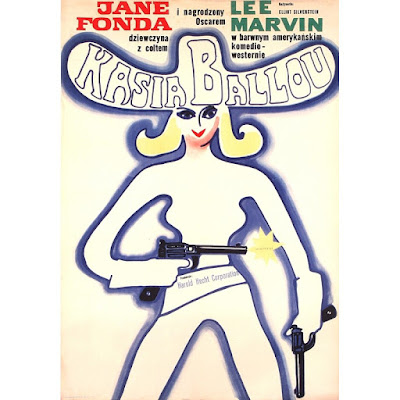 Elliot Silverstein’s Cat Ballou feels like what would’ve happened if a Hollywood studio tried to make Blazing Saddles (1974) without Mel Brooks as a director or Richard Pryor as a writer. Ostensibly a tongue-and-cheek send-up of the Western genre, it neither satirizes nor parodies; it doesn’t mock its conventions nor explore their cultural underpinnings. It is, quite simply, a rote Western.

After her father is murdered for refusing to sell his ranch to a nearby town, Catherine “Cat” Ballou (Jane Fonda) swears vengeance and hires notorious gunslinger Kid Shelleen (Lee Marvin), a dead-eyed dead drunk, as muscle. Together they, and an assorted motley of other Western archetypes like the subservient Native American and the good-hearted outlaw, pull off a heist stealing the community’s payroll and hunt the gunslinger who killed Cat’s dad. Astute observers will note that in some ways this plot predicts Charles Portis’ seminal novel True Grit and its famous film version starring John Wayne by several years. Yet it’s Portis’ novel and Wayne’s film we remember better, mostly because those two works weren’t half-deluded about their identity. Cat Ballou, on the other hand, can’t realize that it works better as a musical than it does as a Western, and certainly better than it does as a comedy.

The most inspired moments in the film come from Nat King Cole and Stubby Kaye’s cameos as the film’s Greek chorus, popping up now and then to ironically comment on the story while ostentatiously pretending to play the banjo. Whenever the film embraces the elasticity of the musical, it succeeds wonderfully. But these moments are few and far between. Most of the film consists of tired comedy that felt tired even by the sixties. Consider one sequence where Cat’s gang flees from a posse after robbing a railroad. Sped up like a silent film, they chase literal circles around each other like Laurel and Hardy were waiting just off-camera for their cue to make a pratfall.

A few words must also be said about the elephant in the room: Marvin’s winning the Oscar for Best Actor as Shelleen, beating out the likes of Olivier, Burton, and Rod Steiger’s career-best performance in The Pawnbroker (1965). Not only was he a supporting character at best, his performance was hackneyed burlesque. Marvin gave many Oscar-worthy performances in his career. This wasn’t one of them.
Posted by Steve Kopian at June 23, 2020