THUMBS UP FOR MOTHER UNIVERSE: STORIES FROM THE LIFE OF LONNIE HOLLEY (2020) Fine Arts Film Festival 2020 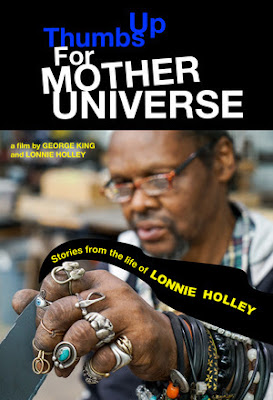 I don't think I actually knew the name of Lonnie Holley before seeing this film about him. I know I have seen some of his work but I really don't think I ever heard his name. I say that partly as a confession  for some imagined grievous wrong and misplaced guilt. I think the guilt comes because after seeing THUMBS UP  I understand work that I know I liked when I saw but which, outside of context I never understood.

Holley is man of many talents. One of 27 children, Holley had to make due with things that were tossed away. Holley eventually took the mess we threw away and refashioned it into amazing pieces of art that force us to ponder the notion of what art is as well as what we are discarding. His work is on display in many of the world's great art museums. At the same time Holley is a noted musician  who brings forth the soundtrack that goes with his art.

Excellent documentary is kind of like its subjects art, at first off putting, and then utterly  fascinating. I say this because thim opens with shots of what looks like junk, but which on further examination is some really cool and really clever art. Yes, it could be junk or cast offs, but the reality is that it has been repurposed and refashioned into something much more clever. It is no longer junk but an expression of an artist who sees the world differently than you and I normally do. 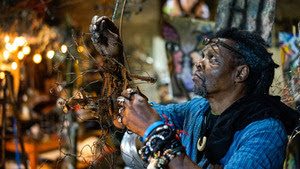 And what I love about Holley and his art is that the film is that it forcibly grabs you and makes you rethink what you are seeing. No that isn't just chicken wire, no those aren't just shovels, not that isn't a frying pan...or rather it once was those things but in Holley's hands they are something much more. After looking at what Holley does your sense of the world changes and you suddenly see new possibilities.

I like that the film itself doesn't feel polished. In away it feels like director George King was wandering around after Holley with a camcorder or cellphone. Normally that would be a kiss of death for a film but not here. Here it is used to great effect  in that the occasional rough hewn edge to some of the images now make us feel like we are with Holley. We are not someone distant from us, rather he is our personal tour guide through his life. The distance of formal documentary camera set up disappear and we are right there. Hell, some of the footage could be our own. 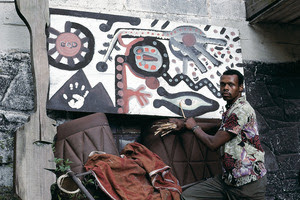 I am floored.  I loved this film

To be fair I know this isn't going to be for everyone, some people like their art more formal and their presentation the same way. Personally I'll take it anyway I can get it that makes me think and feel and THUMBS UP.... made be do both from start to finish.

THUMBS UP... has World Premiered at the Fine Arts Film Festival which is being presented on line in connection with the Venice Institute of Contemporary Art.
Tickets for the RED section ($10) of the festival which THUMBS UP... is part can be found here
(The film can also be purchased individually for 3.99.  And a a full festival pass is only $20 and gives you access to all 92 films) 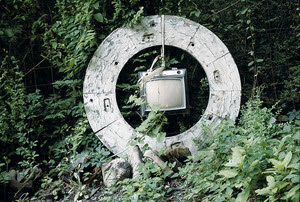