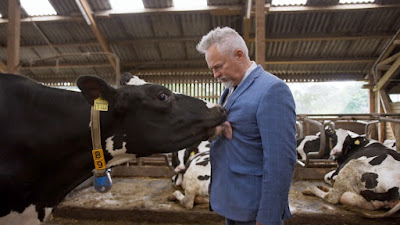 WHO FARTED? maybe an imperfect film, but I laughed my ass off and as such I'm putting it on my Best of 2020 list. That may sound crazy, but few films have made me laugh as much as this documentary and in these trouble times laughter is a valued commodity.

The film is the story of co-director Albert Nerenberg's need to see if   his daughter's assertion that cow farts are going to destroy the world is true. What follows is a rip roaring trip through the history of farts and farting with some serious talk about whether flatulence is responsible for global warming.

Yes, much of this film is full of fart jokes and puns, or if not jokes, humor laced discussion on what farts are and what their place is in culture is. It is screamingly funny and most importantly, incredibly informative. No joke, even if you think you know everything about bottom burps, you are certain to learn something.

The best part of this film is it will probably get you to lighten up. I say this because I know that some people will be offended, I have had a couple of people refuse to see the film based solely on the subject matter well before they even got a whiff of it's contents. Clearly they don't think they fart, but as this film proves pretty much every animal except birds pass gas, and there is nothing wrong with it. And if you see this film you will understand that the only thing wrong with farting is getting upset when people do something they can't stop doing.

As great and wonderful as the film is the film does have one problem and that is the climate change stuff. I'm not arguing against climate change or that flatulence may be part of it, rather how the subject is broached is not well handled. I mean while climate change and cow farts is what sets the ball rolling trying to steer the ball back into that court doesn't go smoothly.

Regardless if you want to learn about farts, both your own and cows, and you want to laugh your ass off and dont mind stinky humor  WHO FARTED? is a must see.

The Canadian broadcast premiere is June 28 with CBC’s documentary Channel, 9pm ET and PT.
Posted by Steve Kopian at June 26, 2020