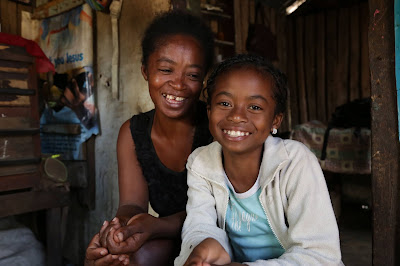 That Cam Cowan's MADAGASIKARA isn't on anyone's radar is a great big shame. A crushing look at life in Madagascar it makes you wonder how the hell a country that essentially has has no real upheavals in sixty years can actually be worse off. Why isn't anyone one talking about what is happening on the island nation?

Hands down MADAGASIKARA has the saddest opening of any film in years. In a matter  of fact way a mother talks about the death of her daughter because she couldn't pay for medical care. Unable to even afford a proper burial they dug a hole just outside of the door to their house and buried her. It was one of the most tragic things I have ever heard and while things get degrees of better, it is story that has stayed with me in the weeks since I first saw the film.

What follows that heartbreaking moment is a clear eyed look at what is happening in the country. We watch how the families profiled struggle to get by and we also get a sense of how the international community has allowed the ruling parties to run roughshod over their people. Or rather mostly, since there is a visit with Father Opeka who has started a community around a garbage dump where thousands of people live. Opeka was the subject of a recent feature film portrait which made the priest out to be a bit too super human. Here he is angry and pissed off in just the right amount. He also isn't the focus so we get a better sense of what is going on in Madagascar)

While the film clearly reveals what is going on in the country, hence the sense of supreme melancholy that hangs over the film, there is hope. The children are going to school and working toward a future. Additionally the spirit of the people isn't broken and they are hopeful that, someday perhaps things will get better.

MADAGASIKARA has floored me in a way few films in the past year have. It is most certainly one of the most important films I have seen this year as well as one of the best. Though you will excuse me if I keep my remarks brief simply because this film has been playing around in my head for weeks and I have not been able to get a complete handle on it. That is a sign of a great film because it is not easily forgotten.