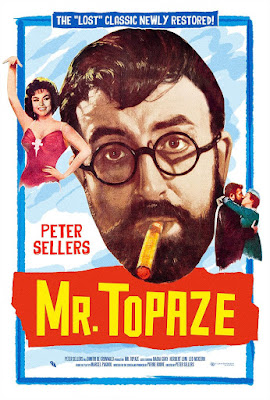 By the time that MR TOPAZE had arrived in the US it had been retitled to I LIKE MONEY. Reviews in England were all over the place, as they would be in the US, so the studio was desperate to get people to go, printed ads and posters with both the good and bad reviews and asked people to make up their own minds. It didn't help. The mixed to poor reaction to the film supposedly stung director and star Peter Sellers so much that he tried to destroy the film (only a single print survived at the BFI). He also never directed another film again (though he should have)

That the reaction to the film was all over the place should have been expected. The Pagnol play upon which it was based had, according to reports, a similar reaction. Indeed Raymond Massey who played the Seller's role on stage, said the audience loved the first half and then often didn't applaud the second they were so flabbergasted.

I am uncertain what I think of the film, but damn I am happy it exists.

The plot of the film concerns Mr Topaze, a poor but incredibly honest school teacher. He is loved by many, thought a fool by others. After he is fired for refusing to change the grade of a bad student, corrupt  Herbert Lom thinks he can use him for his own gains, but he turns the tables on him becoming rich and a son of a bitch in the process.

Beautifully acted, this has a supporting cast to die for. Michael Gough, Leo McKern, Billie Whitelaw John Neville and Herbert Lom all appear and give Sellers magnificent support. Sellers himself is stunning and with everyone focused on the Pink Panther films we forget how good an actor he really was (remember he received three Oscar nominations).

The trick in the film is the flip in the second half that allows for a catch in your throat denouncement- money will corrupt and the only way to gain real respect is to be a bastard. How you react to the flip in the story is going to determine how you react to the film. I mention this because outside of that there is nothing wrong with the film. Your reaction is going to be entirely based upon how you react to a really nice guy going bad, or as bad as a comedy can allow. And the reason your reaction to this is going to be so strong is that Sellers is likable you hate to see him turn. I know that there have been other film versions of the play, including two by Pagnol himself, but I haven't seen them. However based upon the cast lists and the information I can gather the reaction to those versions was not as strong as it was to this one  is probably due to Peter Sellers performance. If you don't know the story, and even if you do, seeing the likable Sellers go corrupt is kind of upsetting.We want there to be good men in the world and clearly there is no room for them.

With all that is happening in the world perhaps MR TOPAZE was 60 years too early.

For details on how to watch MR TOPAZE go here.