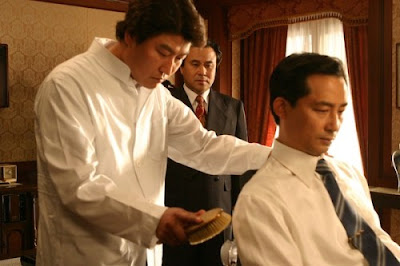 In the years since its release, many have pointed out that Im Chan-sang’s The President’s Barber feels like a South Korean companion to Robert Zemeckis’ Forrest Gump (1994). Both films are about, shall we say, slow protagonists who through chance and coincidence find themselves thrown into climactic events in their nations’ histories. But while Zemeckis’ hero found himself pushed and pulled across continents and countercultures, The President’s Barber mostly restricts its hero to his home neighborhood. Of course, said neighborhood is the Jongno-gu district of Seoul, the location of the Blue House, the official residence of South Korea’s head of state.

The protagonist Seong Han-mo (Song Kang-ho) would love nothing more than to keep his head down and operate his barber shop in peace. But after a madcap kerfuffle with a man he mistakes as a North Korean spy, Han-mo is summoned to the Blue House and becomes the president’s personal barber. The president, however, is Park Chung-hee (Jo Yeong-jin), a former general who seized power in a coup d’état and ruled over South Korea for almost twenty years as a brutal military dictator. As Chung-hee’s barber, the hapless Han-mo gets a front-row seat to Chung-hee’s tyrannical reign, enjoying an odd personal immunity usually reserved for a dictator’s private doctor. Unfortunately, as Han-mo finds out, that immunity extends to him and only him as the film takes a sharp dramatic turn from breezy comedy after the first hour. After a group of North Korean assassins are foiled mid-mission by a sudden wave of diarrhea, Chung-hee’s government begins a round-up and purge of anyone in the capital suffering the same affliction, making the logical authoritarian deduction that having the runs proves someone had illicit contact with the spies. Among those disappeared for “questioning” is Han-mo’s son who—after a bizarre sequence involving a reluctant torturer, an electric chair, and Christmas lights—is returned to their house a cripple.

This speaks to the essential difference between The President’s Barber and Forrest Gump: the latter film assumes that someone can blithely bumble their way through history without being scarred by it while the former realizes that assumption is ridiculous. Unrestrained power corrupts, and anyone said power rubs up against will get hurt in one way or another, even if they’re just there to cut the boss’s hair.
Posted by Steve Kopian at June 30, 2020