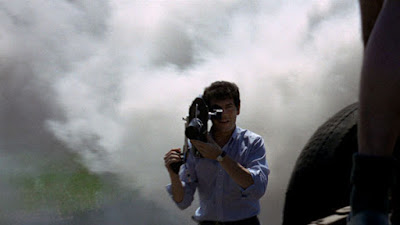 In the wake of the police riot where security forces tear gassed hundreds of demonstrators protesting the 1968 Democratic National Convention, Chicago mayor and “last of the big city bosses” Richard J. Daley made Freudian slip history when he misspoke saying that “the policeman isn't there to create disorder; the policeman is there to preserve disorder.”

But if Haskell Wexler’s Medium Cool is any indication, the true preservers of disorder are the press themselves, the sacred Fourth Estate which seeks to record and not interfere. This is shown most bluntly at the beginning of the film where the protagonist, television news cameraman John Cassellis (Robert Forster), stops at a car accident to film the carnage, ignoring the cries of a survivor, and only calls for an ambulance after he’s got his footage. From there, the film charts Cassellis’ political awakening from neutral bystander to active participant in the social upheaval he's assigned to cover, climaxing in the actual DNC riots where Wexler and his crew found themselves trapped in the middle of the chaos. (In one famous moment when the cops start firing tear gas, we hear someone offscreen shout “Look out, Haskell—it’s real!”) It’s the kind of cinematic kismet most directors only dream of, and it’s one of the most chilling examples of a filmmaker’s camera being in the right place at the right time this side of Barbara Kopple unexpectedly recording an attempted strikebreaker assassination in Harlan County, USA (1976).

But unlike Harlan County, Wexler’s film is a docu-fiction hybrid that puts, as Roger Ebert once memorably described, “fictional characters in real situations [and] real characters in fictional situations.” On the one hand we have Cassellis whose political awakening—spurred on by a confrontation with black activists and the discovery that his news station has been giving his footage to the FBI—is matched with his romance with Eileen (Verna Bloom), a single mom from West Virginia who struggles to provide for her curious but emotionally withdrawn son Harold (Harold Blankenship). On the other we have vignettes—some staged, some apparently not—of America’s nervous breakdown, from belligerent, white gun owners at a shooting range to a training montage of National Guardsmen rehearsing crowd dispersal techniques. Do the two mix? Not always, particularly the odd flashbacks involving Harold and his deadbeat dad back in West Virginia, but as a document of 1968 America’s psyche it’s irreplaceable.
Posted by Steve Kopian at June 21, 2020