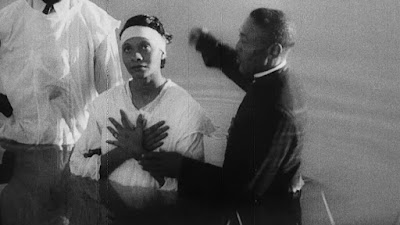 Films about Christianity were nothing new in American cinema when Spencer Williams’ released his 1941 race film The Blood of Jesus. From its very beginning, Hollywood figured out that movies about the Bible could bring in beaucoup bucks if made and marketed properly. The master of early crowd-pleasing religious filmmaking was undeniably Cecil B. DeMille whose more is more philosophy helped pioneer the bloated Hollywood epic with goliathan sets, spectacular action set-pieces, and massive crowds of extras. (It didn’t hurt that he also realized one could cram as much sex and skin onscreen as one wanted so long as unrepentant sinners were rewarded with damnation or perdition by the end.)

Williams’ film, then, represented this formula’s diametric opposite. While filmmakers like DeMille had veritable blank checks for financing, Williams shot the entire movie with just $5,000 (a little over $87,000 when adjusted for inflation). Where DeMille had world-famous stars, Williams had a cast of nonprofessional amateurs sourced from the area around his Texas studio. And while DeMille’s style drew from the pomp and ostentation of the High Church—his family were Episcopalian—Williams’ film feels like the flowering of a syncretist Christianity that blended Low Church Protestantism with Southern folk mythology.

Consider the opening sequence which shows a procession of white-robed faithful singing gospel hymns while marching down to a river to be baptized. There’s gravity to the proceedings, but no solemn pompousness—women gossip and bicker while in line and a reluctant convert pretends to see a snake in the river so he can scurry off back to whatever den of iniquity he crawled out of. (This latter moment is played for comedy, something that DeMille wouldn’t and couldn’t do—he would’ve regarded the scene as a shocking breach of religious propriety.)

The plot further underscores the influence of black mythology: after accidentally being shot by her husband, a woman named Martha (Cathryn Caviness) is tempted at a literal crossroads in the afterlife between fast living and Satan—appearing as a suit-wearing, jazz-loving trickster—and salvation and heaven (this last represented by a conspicuously black angel and images of an even more conspicuously white Jesus). Williams’ style vacillates between the amateurishly primitive and the symbolically sophisticated, even lifting shots from a silent Italian film showing souls entering the gates of heaven. Overall, the film is a bona fide piece of religious folk art.
Posted by Steve Kopian at June 19, 2020