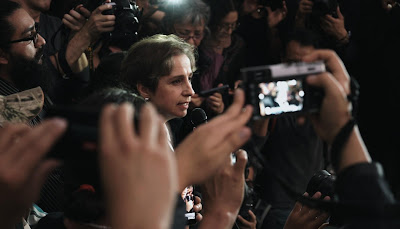 Portrait of Mexican journalist Carmen Aristegui who for generations was the voice of justice in Mexico but was fired when she revealed that the new president of the country had a palatial mansion built for him by a consortium with Chinese money behind it and who was looking for a lucrative rail contract.  With nowhere to go she starts up an online news service and continues to be a thorn in the side of the powers in Mexico.

A glowing portrait of a truly great woman is a little too low key to generate the level of excitement it really should. As important as the subject is, director Juliana Fanjul, undercuts things by using a whispering narration/commentary that sees to run counter to the important things the film is trying to say. Why are you whispering? The things we are seeing and being told should be shouted from the rooftops. Add to that the fact that there are endless shots of the skyline of Mexico City or of cars driving and the film seems to be trying to pad itself out to fill a feature running time.

To be honest once you get past the whispering and the endless shots of cars driving this is an excellent portrait of a woman who is going to fight until the bitter end. It is an eye opening look at the state of affairs in Mexico where the corrupt government and the brutal violence are keeping everyone on edge. From  that stand point this film is a vital one and demands to be seen since it hows clearly how the powers that be are attempting to control the narrative and silence those reporting on the misdeeds and the opposition.