Brief Thoughts on THE LAST DAYS OF AMERICAN CRIME (2020) 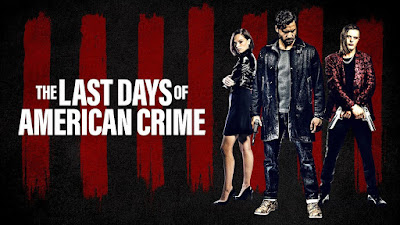 THE LAST DAYS OF AMERICAN CRIME is the latest entry on the 0% club at Rotten Tomatoes. That's the legendary list of films so bad that no critic will say a kind word about it. While I will argue that many of the films on the list aren't that bad, this is one turd ball that belongs there. Its a film sunk by its basic premise.

The plot unfolds in the final hours of a free America.  Some bad criminals commit some final crimes and get payback before the American government uses an electronic pulse to prevent anyone from doing anything they believe is wrong. The main characters are hoping to score big and get the hell out of dodge (Canada or some where south)

You will forgive me for not remembering anyone's name, I honestly didn't care enough to try to file it away for this review. The problem is not the actors, who are all good, nor the filmmaking, which aside from an uneven sense of scale (some scenes should be bigger and have more people in them, while others just as some of the set pieces are in a world that is too big)  is actually pretty good.  No the problem here is the underlying premise and the related plot, all which is just stupid...

That should be stupid in the extreme, I mean the idea of stopping people from doing wrong by beaming a signal at people is a non-starter. Honestly many criminals don't see what they are doing as all that wrong, so why would they be affected by the signal? More to the point the filmmakers never create a world where we would believe this to happen. Its simply the amorphous US government as evil is doing this...and that's it. It never feels real - especially since the sets in the early part of the film feel as though they are from a cheap ass 1950's TV show.

What kills me is that the premise is used by the filmmakers to have people do terrible things to each other before they can't. There are alot of crimes going on in the fringes of the frame as people beat each other up, women dance topless and mayhem reigns. Why? It really makes no sense on any level.

What irks me is that had the plot been a simple crime narrative this film probably would have worked. Edgar Ramirez and the rest of the cast are game and if you can push the bullshit last days of free will aside the film actually kind of works. The problem is the loss of free will is key to the motivation for the story with the result that every time it creeps in you remember how stupid it is.

In trying to figure out if this is a good film or a bad (yes it is)  I realized that this might have worked, dumb premise and all, if this film wasn't 800 hours, er, two and a half hours long. This is an unending film that never seems to run out of story. I have no trouble with any length film- but this is one case where Alec Kubas-Meyer's statement to me "I'm all for any film that is 90 minutes or less but if it goes longer, especially over two hours it has to prove to me it needed to be that long." LAST DAYS never proves it, it just drones on and on.

While the film is free if you are paying for Netflix, it isn't good enough to waste your precious time on something as stupidly plotted as this.
Posted by Steve Kopian at June 20, 2020

Email ThisBlogThis!Share to TwitterShare to FacebookShare to Pinterest
Labels: action, crime, not worth the effort