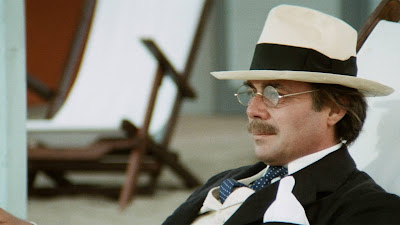 One must needs be in the proper mood for Luchino Visconti’s Death in Venice. It’s not a film for those seeking the neorealism of Visconti’s early career or the lavish, melodramatic epics of his later work. Instead Death of Venice is a deliberate attempt to transpose the literary prose of German author Thomas Mann into cinematic images. As film critic Lauren Humphries-Brooks once explained, one of Mann’s predominant obsessions was the aesthetic death of the soul, and whether he was examining the petrification of Europe’s nineteenth century bourgeoisie in Buddenbrooks or interrogating the cryptic elusiveness of man’s inner heart in The Magic Mountain, he plumbed the aesthetic boundaries of the written word and its capacity for capturing the self-destruction of man’s deepest yearnings. Visconti’s adaptation therefore is almost completely lacking in story. It elects instead to dwell on absence and emptiness, sucking the sweet wound of upper class inertia like one would a cut on the lip or a sore on the tongue.

The film follows Gustav von Aschenbach (Dirk Bogarde), a composer whom we learn in intermittent flashbacks developed a heart condition after suffering the death of his cherished daughter and the failure of his latest symphony. He arrives in Venice under doctor’s orders to get some bed rest, and for the first act of the film we watch and consider the world around him exactly as he does. He—and by extension Visconti’s camera—regards things with a detached aloofness, gliding through dining rooms, canals, and beaches like an unseen, incorporeal phantom. But his life snaps into focus when he spies a Polish teenager named Tadzio (Björn Andrésen) vacationing with his family in the same hotel. For the first time in years, perhaps even decades, he recognizes an embodiment of everything in life that is lovely and wonderful, and he finds himself desiring—truly desiring—once again.

Modern commentators have dismissed Aschenbach’s affections, and by extension Visconti’s film and Mann’s novel, as pedophilic idealization. But this feels like an ignoring of the text of the film which considers Tadzio less as a sexual being to be corrupted—despite his beautiful physique he frolics and plays with his fellows like a pre-sexual innocent—than as an aesthetic ideal to be cherished. Death in Venice can at times be tedious and slow, but it’s always intimately considered, delicately composed, stirringly acted, and resplendent with an otherworldly beauty.
Posted by Steve Kopian at June 17, 2020