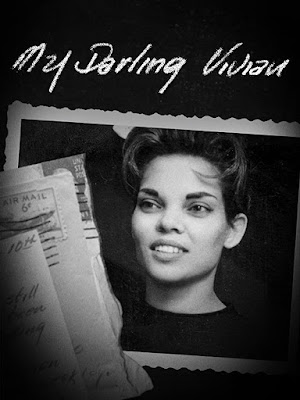 This life and times of Vivian Cash Johnny Cash's first wife as told by her daughters is a must see. The portrait of a woman who unfairly was forced into the shadows by Nashville it reveals a woman who fought to raise her kids in the shadows of one of Country Music's biggest stars.

What most people know about Johnny Cash's first wife is either nothing, or what they know from the Oscar winning film WALK THE LINE, which was less than truthful and raked her over the coals. Vivian and her daughters were extremely unhappy with  that film and her daughters are of the opinion that their mother died in order to avoid having to deal with it..

This is the real story of her life is told here my here four daughter. Filled with photos, films and remenences (as well as bits from her autobiography) MY DARLING VIVIAN goes a long way toward setting the record straight. She was not the terrible person seen in WALK THE LINE, rather she was a complex person who was thrust into a difficult situation by having four kids and a husband who was leaving her home to tour the world. She was not someone who was a monster nor someone Johnny Cash wanted out of his life since they remained friends right up until his death. It is a bittersweet story of a hell of a woman who prospered and loved despite being pushed aside.

While connected to Johnny Cash, this is not Johnny's story. This is all about Vivian. Her presence is in every frame. If you are coming into this looking for lots of Johnny Cash music and dirt look elsewhere. While he is here this isn't his story.

To be honest I didn't want to see this film. I didn't need another Johnny Cash film and I let the first round of requests for coverage blow buy. It was only after a friend said that they had seen the film, loved it so much that they programmed it at their festival, and asked why I hadn't reviewed it that I was shamed into taking a look.

I'm glad that happened because MY DARLING VIVIAN is a great film. It rights a wrong about history and tells a great story in the process. Watching the film all I could think was this story needs a Hollywood version of it's own so it too can win some Oscars and fix the story in people's minds.

If you love country music or just want to see a great story then MY DARLING VIVIAN is worth a trip to the virtual theaters near you (information here)
Posted by Steve Kopian at June 19, 2020