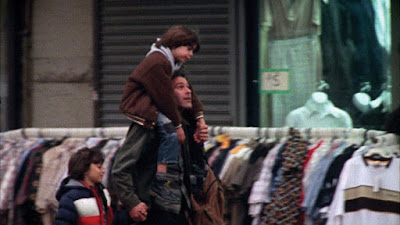 Jean Webster’s novel Daddy-Long-Legs told the story of an orphan girl’s adolescence and young adulthood in the shadow of a mysterious, unseen benefactor who pays for her education without revealing his true identity. A smash hit, the book was adapted into movie form no less than six times, not counting the 1990 Japanese television series (or the 2009 stage musical). Surprisingly, none of these adaptations were Josh and Benny Safdie’s Daddy Longlegs, a film based in large part on the brothers’ experiences growing up with their divorced father.

But this title similarity couldn’t have been a coincidence, particularly for two film buffs like the Safdies. Indeed, if the original novel followed a child who struggled to know their parents, then the Safdie’s movie was about a parent who struggles to know their children. Case in point, the film’s protagonist Lenny (Ronald Bronstein). A divorced, irresponsible screwup who struggles to make ends meet working as a projectionist in Manhattan, he only gets custody of his two sons Sage and Frey (Sage and Frey Ranaldo) two weeks every year. The film follows one such round of custody, and watching him we quickly realize that while his love for his sons is genuine, he has no business whatsoever being a parent. Some of his wise parenting decisions: getting into a belligerent fight with the boy’s principal and a homeless man on his first day of custody; blowing his sons off at night to cheat on his girlfriend; drugging them with sleeping pills that accidentally puts them in a two-day coma when he needs to work an extra nightshift and can’t watch them; getting arrested by the police for spraying graffiti with his idiot friends. In a way, this film is the inverse of King Vidor’s The Champ (1931), one of American cinema’s archetypal father-son stories. While that film saw a clearly unfit father’s paternal love redeemed through self-sacrifice, Daddy-Long-Legs sees a father whose selfishness and immaturity make redemption impossible despite his paternal love.

But the film is far from maudlin melodrama. Filmed largely with handheld cameras shooting Super 16 blown-up to 35mm, it has the jagged rawness of early Cassavetes mixed with the Safdie’s trademark emotional volatility. It doesn’t quite match the nerve-shredding intensity of Good Time (2017) or Uncut Gems (2019), but it’s still like watching slowed-down footage of a car crash.
Posted by Steve Kopian at June 15, 2020