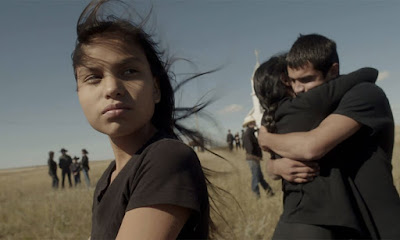 John Winters knows he’s killing his community. He knows that when he illegally sells booze on the Pine Ridge Indian Reservation, he’s murdering a small part of it. He’s seen the scars of alcoholism in his family, in the face of his desperate mother, in the actions of his absent father. He’s attended meetings of recovered alcoholics at the local church and listened in silence as the pastor preached that God will scorch the impurities from their souls with fire. He’s chatted with relatives around late-night bonfires about legalizing alcohol and how it might do more harm than good, but certainly anything is better than what they have. Yet still he sells the stuff. For John is a man of no small ambition—he intends to leave his people’s South Dakota reservation and move to Los Angeles with his girlfriend. For that he needs a car. To get a car he needs money. And the only way a high schooler like him can get it is by peddling poison. So he distances himself from everyone else save his younger sister Jashaun whom he adores and dotes on.

Unlike John, Jashaun doesn’t see dead-end desperation in their reservation. The poverty, perhaps. But when she looks upon the land she sees tides of flame upon the prairie, leaving blankets of ash smoking silently under the stars. She sees cowboys breaking horses but leaving enough of their wild souls intact that they don’t lose their spirit. She sees powwow dresses, plates of fry bread, tattoos, and sacred numbers. She is the bank of hope John crashes against day by day. And for that reason he knows he’ll eventually have to leave her, too.

So it goes in Chloé Zhao’s feature debut Songs My Brothers Taught Me (2015), an achingly poignant portrait of contemporary reservation life. Shot on location and with nonprofessional actors, the film adopts an almost cinéma vérité style. Unlike her widely acclaimed follow-up The Rider (2017), Zhao embraces a sentimentality that could’ve come across as hollow and mushy if not for the film’s ever-present undercurrent of melancholy sadness. Much of this is due to Peter Golub and Tom MacLear’s spare, understated soundtrack which manages a remarkable amount of emotional heavy-lifting with just a piano and some strings. But whatever the reasons, the film is an astonishing debut for one of American cinema’s most promising new voices.
Posted by Steve Kopian at June 25, 2020