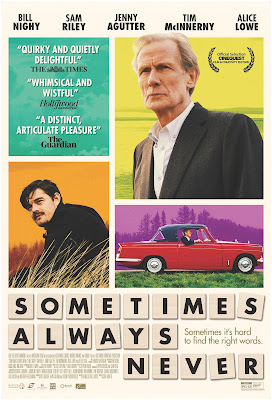 This is not ot be confused with the current virtual theatrical release NEVER RARELY SOMETIMES ALWAYS about unwanted pregnancy. I say that up front because the release of the two similar titled films confused me both in that I thought this was already released.

SOMETIMES ALWAYS NEVER stars Bill Nighy as a tailor who is trying to find his missing son. It seems he stormed out during a game of Scrabble and hasn't been seen since. As he tries to track down his missing son he tries to get back in the good graces of the son who is still aound.

Quirky comedy drama borders very close to being a filmed stage play with most scenes being people sitting around talking. It's close to life in that this is how things would play out but it gives the film a real sense of inertia. I kind of stopped watching and started doing something else since there really wasn't much to look at.

Of course it didn't help in that the characters are so quirky as to often border on annoying. Everyone is mannered. Everyone has their own way of seeing the world, but the trouble is I ever really cared with the endless Scrabble talk turing me off.

While not bad as such SOMETIMES ALWAYS NEVER is more something you either click with or don't. I didn't.