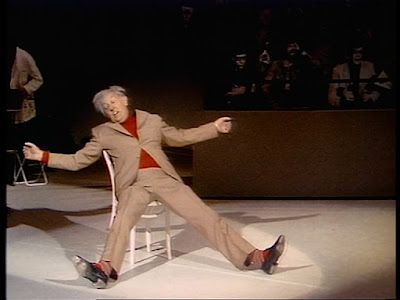 If you aren’t of the personal opinion that Jacques Tati’s last film was Sylvain Chomet’s The Illusionist (2010)—the heartbreaking animated story of an aging magician and a young woman who thinks his powers are real that was based on a previously unproduced script Tati wrote for his estranged eldest daughter—then his final feature was his made-for-Swedish-television Parade. If The Illusionist was a summation of Tati’s worldview and convictions on the human condition, then Parade acts as a similar summation of his feelings about the capacities of cinema to blur the line between audience and performer.

Filmed in 1973 at the Stockholm Cirkus, it features Tati in one of his only non-Monsieur Hulot roles as the emcee of a circus performance which he periodically interrupts with some of his real-life pantomime routines. (Perhaps not-so-surprisingly, Tati uses the same visual language he used for Hulot for his emcee, filming him only in long and medium-long shots and unceremoniously introducing himself by practically barging into and out of another performing group’s scene.) From the start Tati makes the point of transforming the audience itself into a character, watching as the spectators wait in line outside the theater, goof off in the lobby, and file into their seats. They even get some of the earliest and most Tati-esque gags in the film such as a bit where a woman asks the man sitting in front of her to remove his giant motorcycle helmet. When he obliges, the helmet reveals an afro that’s even bigger. As the show continues we get the expected revue of circus acts: a magic show, tumblers, clowns, musical performances.

But Tati periodically cuts to members of the audience whose antics become just as important to the texture of the film as the professional ones on the stage. Some of them are revealed to be audience plants like a nondescript man in a suit who’s revealed as an acrobat during a routine with a live donkey. But others are clearly just extras. Nevertheless they take on lives of their own, most importantly two children Tati turns his camera on at the end of the film to record their spontaneous play among the abandoned props. Tati’s message is clear: a show is never just the show itself—it’s the people in the stands and their reactions that brings things to life.
Posted by Steve Kopian at June 12, 2020