Shock Cinema or What is Steve reading? 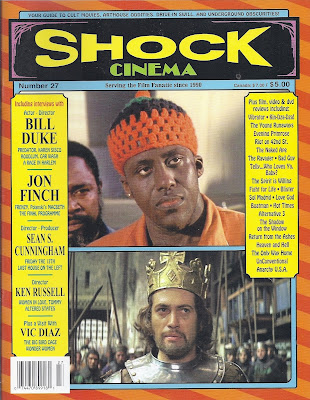 Over 25 years ago Steven Puchalski started publishing Shock Cinema and he is still going strong. I have been a reader for decades. I would pick up an issue here and there depending upon when I saw one at a newsstand and the go through it for films I had to run down.

Over time the magazine drifted from just being a collection of reviews into a full on movie magazine specializing in anything not big and Hollywood. Reading the magazine was, and still is an education because Puchalski had such a wide spectrum of interests that you always ran into something that intrigued you enough to try and track it down.

Recently with the Covid crap I have been getting back to a point where I can do more reading. With less films being flung my way I am reading more. Since my library is largely in storage due to shifting rooms around, I have been looking for things to read and I recently pulled out an old issue of Shock Cinema.  I was instantly in heaven all over again.

What delighted me was the easy mix of facts and discussion. The reviews looked at the films as something more than just a thing to be reviewed, but as a living breathing animal. The discussion did talk about quality and if it as worth seeing but also tossed out facts about the films and the filmmakers that you simply don't get with most reviews today. Puchalski and the others know what they are talking about. They are just happening upon a film because it was sent to them, but because they are in love with the form. Facts drip out about the people connected with whatever they are talking about not because they looked them up, but because the genuinely know the works of whomever, or whatever  they are talking about.

Rereading some of the interviews realized that the interviewers ability to talk to a subject about their entire career, often with more detail than the subject, was something I strove to do with my interviews here at Unseen. I want to know as much about a subject as I can before I talk to them. While I may not be as successful as those at Shock Cinema, at least I'm aiming to copy the best.

When I finished the magazine I also realized that I needed to get all the back issues. There were bits and pieces in the magazine that I wish I had had available to me recently. With Covid altering the release schedules I have some reviews of some older films lined up and I wish I could have had the context the Shock Cinema reviews and interviews could have given.  Additionally I was also having a blast rereading and finding new films to track down or revisit. To that end I ordered the entire run of the magazine (in a couple of orders). Clearly my dance card will be full for several weeks.

One of the things I have loved about reading the early early issues from the mid-1990's is the pleas to information on getting good copies of many films we now have readily available. Films that are mainstays of Asian Cinema are talked about being sourced from convention dealers or odd sources. Everything is VHS and there is no internet. Oh how things have changed.

Do yourself a favor and get some issues. All the information can be had here. The list of available issues is there. What I love, and what pushed me toward getting the run is the website has a listing from issue 4 until 54 what everything that is reviewed, who is interviewed or discussed. Look it over and you will find just how wide their net is.

I can't recommend them enough. 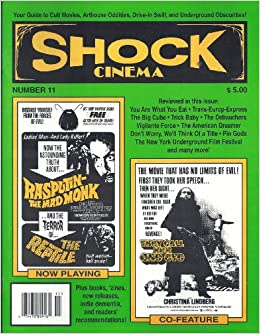 Email ThisBlogThis!Share to TwitterShare to FacebookShare to Pinterest
Labels: magazine, not a movie