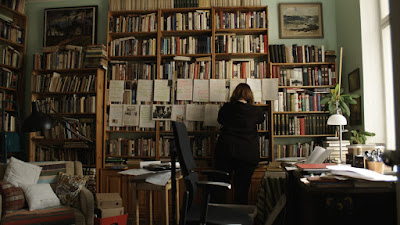 Portrait of Leva Lešinska-Geibere as she tries to sort out who exactly her father was and what exactly happened that caused him to drag her along when he defected to the US thus splitting her life apart.

In 1978 while she was a student in Latvia, Leva was asked by her father to come spend a month in New York during her summer vacation. Imants Lešinskis was working at the UN and he thought it would be good for his daughter to see America. However things happened, the head of the Soviet mission defected and things were thrown into turmoil. Then on a side trip to Washington DC Leva's dad and second wife announced that they were defecting right there and then. She could go with them or she could take a taxi to the Soviet embassy and defect.  She stayed and her life was split apart.

Decades later Leva tries to figure out what happened. How did it all go down and why. Mostly she wants to know who her father really was and whose side was he on. Through family photos, various documentation, recreations and interviews with anyone still alive.

What makes this film work, and what kept me watching is the desire to find out how this was all going to go. At the start I wasn't sure if I was going to get hooked since the beginning made this seem like a typical Cold War story, then the defection happens and the world turns upside down and we have to see what happens next. As Leva tries to work out what was coming next and why and so are we. While we know and can guess some of it, the fact that Leva's dad was a spy adds a layer that has to be pulled back.

I enjoyed the hell out of this wild ride.

If you have any interest in spies or more importantly just a good tale MY FATHER,THE SPY is recommended when it hits VOD on Tuesday
Posted by Steve Kopian at June 13, 2020