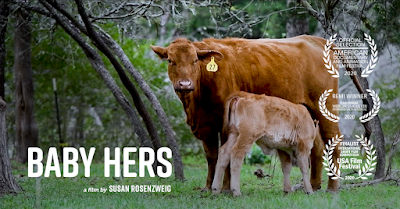 Okay documentary seeks to move the farming industry away from factory farming to smaller environmentally and humane sound methods of producing milk and other products. Its a noble cause that I'm all for.

While I don't have any problem with anything we see in the film from an informational standpoint I found the presentation a bit bland.While I tend to refer a quiet approach the shortness of the film  isn't suited for that style. I also don't know if we really need the discussion of human babies and their mothers that weaves their way through the film. It is not that there's anything wrong with it on the face, but more that it seems more an attempt at manipulation, something the rest of the film doesn't do.

In the en BABY HERS is okay, but nothing special.